by Christopher Hassiotis Nov 7, 2016
Despite their good intentions, businesses looking to encourage voting with discounts or offers are actually violating a law that aims to prevent corruption and vote-buying. bubaone/Getty Images

The more people who vote, the better and more representative a democracy is, right? So does that mean that we — individuals and businesses alike — should do everything within our power to encourage voting? Well, within the law, sure, but within our power? Not necessarily. Though their intentions may be well placed, that local coffee shop offering a free cup of coffee to anyone who voted, the bakery giving away a cookie to anyone wearing an "I Voted" sticker, and any other business offering something of value as a reward or incentive for voting is violating federal law.

And that's not all — anyone who accepts something of value is likewise breaking the law.

"Each state has its own law on this issue — and presumably each county or town may also — but federal law clearly prohibits giving anything of value in exchange for voting," says Thomas J. Simeone, a Washington, D.C.-based attorney, via email.

The law goes back to days when there was more overt political corruption in the American political system.

"It is supposed to keep people from literally buying or selling votes, and from interfering with the outcomes of elections," Abigail Salisbury, a Pittsburgh lawyer who works primarily with nonprofits and small businesses, and has advised clients on the matter, says in an email. "At one time, giving voters monetary incentives was a common enough practice that it warranted legislation against it."

Want to get to the nitty-gritty? Here's what the relevant federal law, 18 USC 597, actually says:

So does that mean that your Facebook friends who are offering to buy a drink for anyone voting for their preferred candidate is technically violating federal law? It looks like that could be the case.

"What makes this interesting is that the line between 'paying' someone to vote and encouraging or assisting someone to vote or thanking or congratulating them for voting is not always clear," says Simeone.

Businesses aiming to encourage civic duty need not pack up shop and erase any mention of the election — nobody lives in a vacuum, right? If a coffee shop wanted to reward people wearing voting stickers, they'd have to extend the offer to all people wearing stickers, for instance. Stores could institute a broadly applied Election Day discount available to anyone, regardless of whether they voted or were planning to. And Salisbury says that businesses could offer something of no monetary value — ringing a bell when a customer tells them they voted, for instance.

"The expenditure element is noteworthy," says Salisbury, "so businesses could theoretically try looking at perks without any monetary value to keep the spirit of the voting reward without violating the law.  I haven't heard of anyone trying nonfinancial perks like preferred seating, but there could be options based on the type of business."

Simeone agrees that despite the letter of the law, it's the intent to prevent corruption that's the thing, and you and your favorite neighborhood restaurant offering anyone with an "I Voted" sticker a dessert are likely in the clear. And the law's so obscure that even national chains with presumably strong legal departments — Starbucks, Tim Hortons and Ben & Jerry's, for instance — have had to change their promotions to comply with the technicality.

"This is therefore a case where the spirit of the law differs from the letter of the law," says Simeone. "That is likely why the law has not been enforced strictly and, I believe, no one has been imprisoned for receiving a free cup of coffee."

Now That's Interesting
Those little election stickers saying "I Voted" can add up, costing states millions of dollars to print.

Drivers Who Merge at the Last Minute May Be Annoying, But They're Right 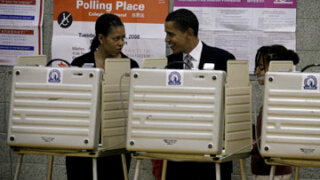 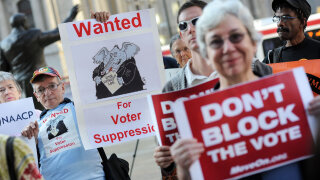