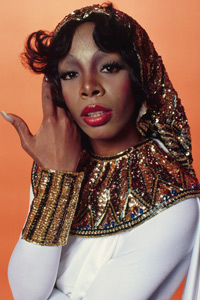 Donna Summer, the queen of the disco
Fin Costello/Redferns/Getty Images

The word "disco" is short for discotheque, a French term for night clubs where people could dance to pre-recorded music (as opposed to live bands). In the late 1960s in New York City, discos were popular in the gay, black and Latino communities. Some trace the beginning of disco music to 1970, when a man named David Mancuso hosted the first of many legendary dance parties in his apartment, known as "The Loft." Mancuso invested in a state-of-the-art stereo system that allowed him to segue seamlessly from one song to the next without stopping to change the record.

Though "disco" originally denoted the place where dance music was played, the term morphed to describe the kind of music that was played. Disco music, above all, is music that you can dance to. It's typified by a steady beat, known as "four-on-the-floor," and it usually features prominent orchestral or big-band arrangements. These features were borrowed from a type of soul music that was popular in Philadelphia at the end of the 1960s, and it evolved to include electronic elements and synthesizers, thanks to European dance music.

Music critics are divided on the first disco single; some say that Barry White and Isaac Hayes were singing disco-sounding music in 1971, while others say that 1974 marks an official beginning of the disco era, with Hues Corporation's "Rock the Boat" and George McCrae's "Rock Your Baby" appearing on the scene [source: Henderson]. While no one single may be able to mark disco's start, the musical style had hit its stride by 1975, and for the next four years disco reigned supreme. Disco's biggest hits include songs like "I Will Survive" by Gloria Gaynor, "Funkytown" by Lipps Inc., "Le Freak" by Chic, "Stayin' Alive" by the Bee Gees, "Get Down Tonight" by KC and the Sunshine Band, "Last Dance" by Donna Summer and "Play that Funky Music" by Wild Cherry.

Since disco music was designed to get crowds dancing, the lyrics of the songs often took a backseat to the beat. It was also harder for musicians and bands to sustain a long career in disco. People didn't care who was singing or playing a song, as long as they could dance to it, which is why you'll see many one-hit wonders among a list of disco's greatest hits. Rather than forming allegiances to specific singers, disco-goers more often paid attention to a great DJ who could keep the party going or to producers (such as the team of Kenny Gamble and Leon Huff) who were known for turning out consistently great records.

People also became devoted to their favorite nightclubs, but no one would have headed out to dance without dressing to the nines. We'll explore disco fashion on the next page.