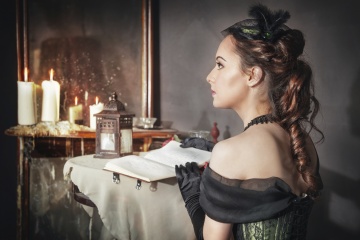 Women may have a lot of social pressure to conduct themselves a certain way, but who really invented most of those etiquette rules?
darkbird77/Thinkstock

Sure, women invented etiquette. You also could say they invented chatting, strolling through parks and watching awards shows together, but of course you'd have to acknowledge that men "invented" those things too. Like many social customs, both women and men have helped develop etiquette through the ages. While we might look to women such as Miss Manners or Emily Post to teach us the finer points of wedding protocol or the table setting in the modern age, etiquette does not have a female-dominated history, by any means.

In fact, it was in the court of King Louis XIV of France that etiquette first became fashionable — and strictly enforced. Louis was a big fan of protocol (his words, surely), and the rise in etiquette was probably related to the fact that his court was known for its social-climbing courtiers [source: Durant]. A rigid set of rules and manners helped to keep egos at bay, ensuring that deference was shown to the hierarchy. But does that mean Louis XIV himself invented etiquette?

Of course not. Naturally, as we have for as long as social community has existed, we create rules and modes of being around behavior. (Some might cite the Bible for detailing an "etiquette" around, say, not killing your brother.) In the European Middle Ages, for instance, there weren't many stuffy rules about which utensils to use or when it was appropriate to spit on the floor (whenever the fancy strikes!), but there was still a hierarchy to follow, and cleanliness was admired [source: Jones].

In fact, there's some evidence that certain types of etiquette were invented to protect women [source: Mankiller et al]. The strict rules of 19th century etiquette might've acted (or at least been intended to act) as a guard against the brutalization of women, and some would point out that workplace etiquette is designed to minimize sexual harassment or discrimination [source: Mankiller et al]. (Whether that's worked is extremely debatable.)

Of course, none of this evidence points to the conclusion that women were solely responsible for societal rules and customs. Instead, etiquette is something that people were creating and changing based on necessity (and desire) since the beginning of time. Whether the motivation was an enforced social hierarchy, a defensive barrier for those not able to protect themselves or just a good way to create some fun gossip when the rules were broken, etiquette was certainly a communal invention.

Why Do We Have Middle Names?
Hey Dad! The Famous Fathers Quiz
Why Do We Love Guinness World Records So Much?