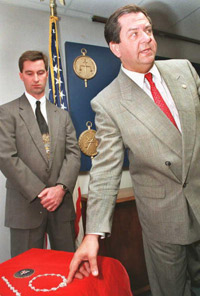 It's pretty amazing how diamonds are recovered. There's a worldwide network that relies on two basic principles to get diamonds back to their owners. First, diamonds are uniquely identifiable. Second, it's in almost everyone's best interest to recover a stolen gem. The latter is easy to understand in­ terms of insurance. It costs an absolute fortune to insure diamonds. Liz Taylor's 69.42-carat ring originally belonged to publishing heiress Harriet Annenberg Ames, who put it up for sale because it was costing her $30,000 a year just to keep the thing in her safe -- and that was in the 1960s [source: Edward Jay Epstein]. Insurance companies stand to lose millions of dollars when a diamond is never found, and everyone's premiums go up as a result. Plus, jewelers rely on their name to make the big sales. Trust is essential in the business. If a jeweler receives a stolen diamond and gets a bad reputation in the industry, his or her sales will suffer.

The recovery network is huge. The diamond business is a small world that spans the globe. TV shows often show the police sending out bulletins to pawnshops when jewelry is stolen. This is real, except the news goes out to everyone in the diamond world -- jewelers, pawnshops, diamond traders, diamond cutters and anyone else who might come into contact with a stolen stone.

Buying stolen gems can also be a serious crime. It's not like a pawn shop owner accepting a stolen TV set. Plus, without a certificate of authenticity to prove the diamond is not from a conflict area like Sierra Leone (a "conflict diamond" or "blood diamond"), it's too great a risk for a jeweler to have it in his or her collection. People caught trading in blood diamonds face significant legal ramifications.

Stolen diamonds can also be positively identified. There are characteristics of each diamond that are entirely unique, and people have come up with various ways to record these characteristics. When you get a diamond certified, that's what you're doing -- subjecting the stone to a series of tests that can identify it. A few of the tests that can identify a diamond include [source: Patent Storm]:

If a jeweler switches out your stone while doing repairs, these tests can let you know that the diamond in your ring after the repair is not the same one that you took in. If your ring is stolen and it turns up at a jewelry store, this certification tells police whose diamond it is.

Even when no one calls the police, and a diamond thief is successful in selling the loot, it's seldom much of a success. While one must assume that some big-time thieves have black market connections that will let them sell a huge diamond for huge payback, most thieves have to settle for the small-time fences (receivers of stolen goods) that pay nowhere near what a diamond is really worth. In 1979, when New York City police recovered $50,000 worth of stolen diamonds from a fence, it turned out he'd paid the thief $200 for the stones. And the thief was turned in by one of the many jewelers he'd approached when he was looking for a buyer. For your everyday thief, stealing a diamond hardly seems worth the effort.

To learn more about diamonds and thieves, look over the links below. ­

Diamond Thieves on the Big Screen

Just a few of the more famous movies where you can find a good-old diamond heist: