The Diamond Theft: Quick and Dirty 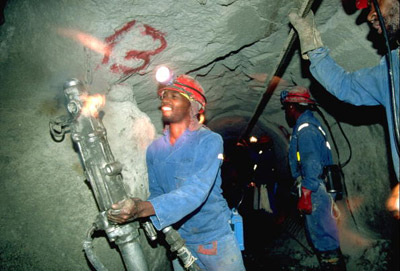 Workers in diamond mines like the DeBeers Wesselton mine in Kimberly, South Africa, have easy -- and regular -- access to uncut diamonds.
Per-Anders Pettersson/Getty Images

Vera Krupp never took her 33-carat diamond ring off her finger. The center stone was about the size of a marble. When two men broke into her ranch outside Las Vegas in 1959, they had to literally pry it off her finger, drawing blood.

Most diamonds thefts are far less glamorous than the 2008 Damiani raid (and far less brilliant). In 2005, two men stole a diamond from a mall jewelry store in Canada using the sleight-of-hand method. They asked to see a solitaire, and when the clerk­ turned her head, they switched it with a cubic zirconia. Mall security found the thieves attempting to do the same thing in another store at the same mall.

In another failed attempt at grand theft, a man in the United Kingdom pocketed a $16,000, 2-carat diamond ring from a jewelry store and got caught when he tried to sell the piece to another branch of the same store. The clerk called the cops while the guy waited patiently for her to weigh the ring in the back of the store.

Still, the most common methods of stealing diamonds often go unnoticed. There's a reason why lots of people insist on watching while a jeweler does repairs or resizes on valuable pieces: A jeweler can easily switch out a diamond for a cubic zirconia, or a perfect diamond for one that's flawed. A jeweler in Palm Beach went to jail in 2000 for switching out real diamonds for fakes when people came in for repairs. In all, he stole more than $80 million in jewels from a wide range of victims (including golfer Jack Nicklaus). However, unscrupulous jewelers can't steal anywhere near the number of diamonds as people working in diamond mines can.

All along the South African coast, workers regularly walk off with millions of dollars in rough (uncut) stones. As they pull diamonds from the churned-up seabed gravel, they'll check to see if guards are watching, and if not, they'll slip one or two under their fingernails. Later, when it's safe, they swallow them, insert them into an orifice or load them onto homing pigeons. One thief in Namaqualand got caught when a guard spotted a homing pigeon trying unsuccessfully to take off. The man had loaded so many diamonds into his bird's harness, it couldn't get off the ground [source: The Atlantic].

In the workrooms, where the floor is strewn with small diamonds, employees wear glue-soled boots and walk right out of the mine with -- yes -- diamonds on the soles of their shoes. De Beers, the diamond conglomerate that runs the largest legitimate operations in South Africa (not the conflict diamond operations run by South African rebel groups), randomly X-rays workers on their way out. Diamonds fluoresce when exposed to X-rays. But due to the of the risk of daily radiation exposure, De Beers can only scan randomly, so lots of those pocketed diamonds make it out mines and workrooms.

Theft from the mines is just part of life on the Diamond Coast. DeBeers spends millions of dollars every week buying stolen diamonds back so they don't flood the market and cause diamond prices to tank. They estimate that workers steal up to 30 percent of the mines' yield [source: The Atlantic]. In these mining towns, it's easy to sell a stolen diamond.

Even with hauls in the millions, it's not the quiet thefts that draw real attention. It's the big, glamorous heists -- ones where thieves walk off with bags of diamonds in a brilliant show of patience and planning. So, what's the most unbelievable diamond heist on the record books? Probably the one in which the thief charmed his way into the safe.­