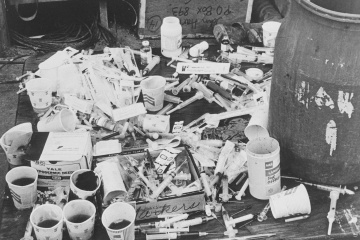 Jonestown was just one of many countercultural groups that emerged during the social and political ferment of the 1960s and '70s. Around the country, thousands of disaffected young people were joining communities organized around social and spiritual principles that were often at odds with the larger society.

Some of these groups persisted, most disbanded after a short time and a small minority took the form of cults. For mainstream parents, now panic-stricken by the deaths in Jonestown, it was sometimes hard to tell whether their wayward children had joined a harmless cooperative venture or a dangerous personality cult.

The term "cult" is slippery. It has several meanings. In its most traditional form it refers to the veneration of a particular person, often a saint. Devotion to the Virgin Mary, for instance, is sometimes referred to as the Marian Cult. Christianity itself began as a cult devoted to Jesus.

Today, small religious communities that coalesce around a single charismatic leader are frequently referred to as cults. And in that context, "cult" has come to have negative connotations in the popular imagination. When we hear the word "cult," many of us imagine brainwashed devotees of some megalomaniacal, self-appointed messiah figure who, at any moment, might incite dangerous behavior.

It was with this notion in mind that the Cult Awareness Network began offering its services after the Jonestown Massacre. For a price, concerned parents could hire the network to get their children out from under the influence of their chosen cult and de-brainwash or "deprogram" them. The hope was that, once deprogrammed, the former cult members would return to their pre-cult ways and reintegrate into mainstream society.

However, many so-called cult followers professed to have freely chosen their lifestyles and CAN couldn't simply persuade them to leave their group. From the get-go, the network adopted the practice of kidnapping the very people they'd been hired to help. They would then sequester them and begin the deprogramming process. Their methods soon proved highly controversial.