The Dalai Lama in Exile 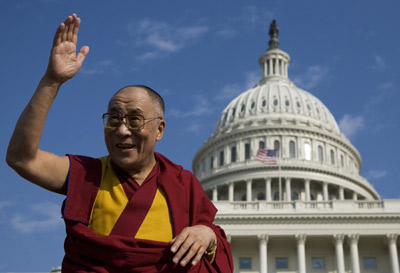 The Dalai Lama has traveled the world in his exile from Tibet. He visited Washington, D.C., in October 2007 to receive the Congressional Gold Medal.
Mandel Ngan/AFP/Getty Images

The Dalai Lama and his escaping entourage convened at the Kyichu River, joined with the Dalai Lama's family and hiked toward the Indian border. India agreed to provide asylum for the Tibetan leader and other refugees in Dharamsala. Once installed in his new headquarters, the Dalai Lama quickly repudiated the Seventeen-Point Agreement and set up a government in exile. His appeals to the United Nations in 1959, 1961 and 1965 were answered with the resolves on Tibet. The Dalai Lama also drafted a Tibetan constitution promising democratic freedom and laying out guidelines for Tibetans living in exile.

He also embarked on a multicontinental, nearly half-century tour to spread his message of compassion and to heighten the world's awareness of Tibet. In 1989, the Norwegian Nobel Committee awarded the Dalai Lama the Nobel Peace Prize for his humanitarian work. While he might be best known for his advocacy of an autonomous Tibet, the Dalai Lama also promotes religious tolerance and human values like compassion, forgiveness and contentment.

Although Tibetans are no longer persecuted to the extent they were in the bloody days of China's Cultural Revolution, political tensions remain high. In September 2007, China enacted laws that regulate the reincarnation of living Buddhas. The atheist state has a history of showing an unusual interest in religious affairs: China has famously battled with the Vatican over the Pope's right to appoint bishops. But China's enactment of Order Number Five, which calls for "living Buddha permits" and bans reincarnation in certain areas, clearly demonstrates an attempt to control Tibet and the Dalai Lama's influence.

In response, the 14th Dalai Lama has suggested several ideas to get around China's influence and invalidate the claims of any future Chinese-appointed puppet ruler. The simplest solution would be to reincarnate outside of Tibet. Most Tibetans believe this is likely since the point of rebirth is to continue working for others -- something that would be impossible under Chinese control. The Dalai Lama might also choose to name a successor while still alive or hold a referendum for Tibetans to decide if they want to continue the position after his death. China decries these solutions as desecrations of religious tradition.

To learn more about the Dalai Lama, reincarnation and religion, look at the links below.

In 2007, the Dalai Lama accepted a new role: distinguished professor at Atlanta's Emory University. And although the Dalai Lama won't teach classes in Atlanta, he'll host annual study abroad trips to Dharamsala and hold his very own campus ID card. The appointment, which makes the Dalai Lama the third Nobel Peace Prize winner to serve on Emory's faculty after President Jimmy Carter and Bishop Desmond Tutu, is part of the larger Emory-Tibet Partnership. Emory offers not only courses in Buddhist philosophy and Tibetan history and language but also is developing a modern science curriculum for Tibetan monks.