Who Were the First People to Brew Beer? 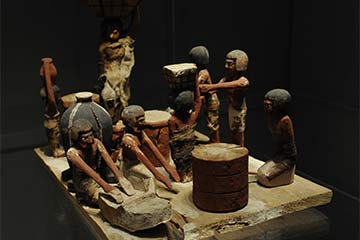 These bakery and brewery artifacts were found in the tomb of Wadjet-hotep (circa 2150-2050 B.C.E.) Breadmaking and beermaking were closely tied in ancient Egypt since they used a lot of the same ingredients.
Prisma/UIG via Getty Image

In a small room at the heart of a brewery, two women grind flour. Other workers turn the flour into dough, which is then stamped into mash. The mash goes into tall crocks to ferment. Once the fermentation is complete, the concoction is poured from the crocks into round jugs with clay stoppers. Beer is born.

While this beer-making method may sound like a modern-day small-batch craft beer at its finest, it's actually a recreation of an ancient brewery in Egypt. The model, containing in the wooden figurines, dates from around 1975 B.C.E and was recovered from the tomb of a high administrator named Meketre [source: The Metropolitan Museum of Art].

Beer was a big part of life in Mesopotamia, but historians believe that the Egyptians learned the craft from an even older race. The first-known brewers in the region were likely the Sumerians, Babylonians and Assyrians who lived to the east of Egypt (modern-day Iraq). But the Egyptians were the ones who documented their brewing techniques for the world to later discover. Beer was both an everyday drink and one for special occasions. Beer even appeared in the Egyptian afterlife, when the goddess Hathor accompanied the dead on their journey to the great beyond and provided a crock of beer for reunited lovers. Beer became so popular that it was taxed, used as a symbol of social power and preserved in the tombs of the wealthy [source: Dornbusch].

Credit for one of the first-ever beers goes to the ancient Chinese. A recipe dated to 7000 B.C.E. called for water, rice, honey, grape and hawthorn fruits, and probably discovered as a byproduct of yeast fermentation in preparation for bread making. An archeologist partnered with a brewer to recreate the 9,000-year-old Chinese beer, mashing a mold cake into rice, watching it ferment, and then adding the other ingredients as it brewed over high heat. To meet U.S. federal brewing regulations, the brewer added barley malt as well. In the end, the drink tasted and looked much like Belgian-style ale, with a brilliant color and fruity notes [source: Roach].

The identity of the world's first brew master will likely remain a mystery. However, it's long been thought that even earlier civilizations -- like the hunter-gatherer tribes who first developed an agrarian lifestyle about 12,000 years ago -- may have been the first accidental brewers. As they planted, harvested and stored wheat, rice, barley and corn, it's almost certain that moisture and heat caused a few batches to ferment. This created a liquid that must have been a lot like beer [source: History]. It's something to consider the next time you pop open your favorite brew: Here's to the Neolithic brewer.