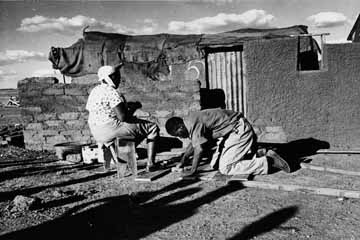 This photo was taken in 1948, but the effects of pre-Apartheid policies are already clear in the community of Moroka, near Johannesburg.
Bert Hardy/Picture Post/Getty Images

Many of the policies that characterized Apartheid reached back to the early 20th century, but it was in 1948, under Prime Minister D. F. Malan, ordained in the Dutch Reformed Church, that the Apartheid state was born [source: South African History Online].

In quick succession, between 1950 and 1953, several laws were passed that would define the lives of black (and all non-white) Africans for the next four decades. Of these, the Population Registration Act and the Group Areas Act, both enacted in 1950, are considered the most critical [source: MSU].

First, the Population Registration Act created distinct legal classifications for the races in South Africa. There were three: white, Bantu (black African) and Coloured (mixed race). (Indians were considered foreigners and therefore left unclassified, but were added later out of necessity [source: Oral History Education].) Under this Act, every single person in the country was placed in one of these racial categories, and marriage between races was outlawed.

This laid the foundation for the second act, the Group Areas Act. This law dramatically escalated segregation by allotting separate pieces of land to each of the three non-white races. Millions of (newly labeled) Bantus, Coloureds and Indians were forced onto race-specific reservations. Families comprising more than one race were separated, and leaving any racial territory required a special pass. The policy was carried out by force, and entire communities were destroyed in the process of moving inhabitants to their new homes [source: MSU].

The Group Areas Act led the way to the Bantu Homelands Act of 1951, which declared each race-specific reservation its own "homeland" and the people within it citizens of that homeland, not of South Africa. From that point on, non-whites needed passports to enter white South Africa.

Over the next several years, racial classifications narrowed to account for ethnicity and lineage and started defining race-appropriate jobs. Pass requirements grew increasingly rigid, ultimately landing millions of non-white Africans in prison when they were caught without complete documentation (or burning that documentation in protest). Public facilities in white South Africa were strictly segregated. And, after the passing of the Bantu Education Act of 1953, the South African government took full control of the education of non-whites, creating curricula designed to indoctrinate them in Apartheid ideology and create a more docile class of servants for the white populace [sources: UN, MSU].

By the end of the 1950s, South Africa's racial underclass was living in desperate conditions. Poverty, famine, disease, confinement and abuse at the hands of whites were the norm. The government appeared to have miscalculated, though, because in these early years of Apartheid, rather than sinking deeper into despair and servility, the servant class became increasingly defiant.

There had been resistance since the Dutch came ashore, and it had always been brutally suppressed. Beginning in the 1950s, though, and especially moving into the '60s, the resistance got more organized -- eventually to great effect.