by Thorin Klosowski
Prev NEXT
3 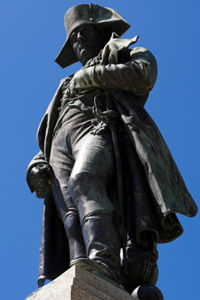 Napoleon helped bring about the end of the Venetian Empire.
Hemera/Thinkstock

The pride of the Venetian Empire was its massive naval fleet, which enabled its rapid expansion across Europe and the Mediterranean, eventually conquering historically important cities such as Cyprus and Crete. The Venetian's ruled for an amazing 1,100 years, from 697 A.D. to 1797 A.D. It began when the Western Roman Empire fell to Italy, but started in earnest when Venetians declared Paolo Lucio Anafesto their duke. The empire went through several significant changes, but consistently expanded across what is now known as the Republic of Venice, eventually warring with -- among others -- the Turks and the Ottoman Empire.

An abundance of wars left the Venetian Empire with little in the way of defenses. The city of Piedmont fell to France, and Napoleon Bonaparte seized parts of the empire. When Napoleon issued an ultimatum, and Doge Ludovico Manin surrendered in 1797, Venice was brought under Napoleon's rule [source: Willis].

The Republic of Venice is a classic example of an empire stretching its borders so far that it couldn't properly protect its capital. Unlike other empires, it wasn't civil war that led to its demise, but war with its neighbors. The highly regarded Venetian naval fleet, which had once been on the offensive, was stretched too thin to defend its own empire.