by Thorin Klosowski
Prev NEXT
5 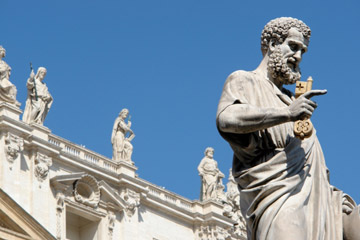 Leaders of the Holy Roman Empire were crowned by the pope.
Hemera/Thinkstock

The Holy Roman Empire was seen as a revival of the Western Roman Empire and as a political counter to the Roman Catholic Church. The name, however, comes from the fact that while the emperor was chosen by electors, he was crowned by the pope in Rome. The empire lasted from 962 to 1806 A.D. and consisted geographically of a large midsection of what is now central Europe, most notably the bulk of Germany.

The empire began when Otto I was declared king of Germany, but he would later be known as the first emperor of the Holy Roman Empire. At one point, the empire was made up of roughly 300 territories [source: Daniels]. After the Thirty Years War in 1648, the kingdom was fragmented -- planting the seed of independence.

In 1792, France was in the midst of revolt. By 1806, Napoleon Bonaparte had forced the last Holy Roman Emperor, Francis II to abdicate, and the area was reorganized as the Confederation of the Rhine.

Similar to the Ottoman and Portuguese empires, the Holy Roman Empire was made up of various ethnic backgrounds populated with lesser kingdoms. Ultimately, the lesser kingdom's desire for independence caused the greater empire to tumble.