by Thorin Klosowski
Prev NEXT
9 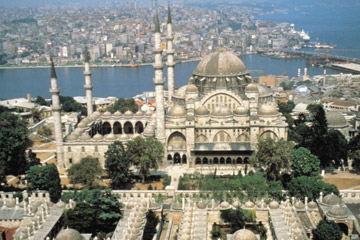 Istanbul, Turkey was once known as Constantinople and was part of the Ottoman Empire.
John Foxx/Stockbyte/Thinkstock

At the height of its power, the Ottoman Empire spanned three continents and encompassed a broad range of cultures, religions and languages. Despite those differences, the empire managed to prosper for 623 years, from 1299 to 1922 A.D. [source: Faroqhi].

The Ottoman Empire got its start as a small Turkish state after the weakened Byzantine Empire withdrew from the area. Osman I pushed the boundaries of his empire outward, leaning on strong judicial, educational and military systems, as well as a unique method of transferring power [source: BBC].

The empire continued to expand, eventually taking Constantinople in 1453 and pushing deeper into European and North African territories. Civil wars in the early 1900s -- followed immediately by World War I and the Arab Revolt -- signaled the beginning of the end. At the conclusion of World War I, the Treaty of Sévres divided up most of the Ottoman Empire. The final nail in the coffin came after the Turkish War of Independence resulted in the fall of Constantinople in 1922 [source: Faroqhi].

Inflation, competition and unemployment are often cited as key factors in the Ottoman Empire's demise [source: BBC]. Each section of the massive kingdom was culturally and economically diverse, and its residents eventually wanted to break free.

Next, we travel back to 802 A.D. to visit a region now known as Cambodia.