How does TV change kids' moods?

Browse the article How does TV change kids' moods? 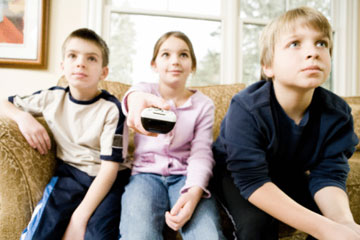 Image Gallery: Evolution of TV Today's kids spend a lot of time watching TV, but how are they affected by what they see? See more pictures of TV's evolution.
Jupiterimages/Photos.com/Thinkstock

It's estimated that two-thirds of infants and toddlers are exposed to onscreen media -- including TV and Internet -- for two hours a day, and kids under age 6 average the same amount of time overall. Children 8 to 18 spend nearly four hours a day in front of the TV, and another two hours on the computer (outside of schoolwork) and playing video games [source: Rideout et al].

There's no doubt that the way we interact -- both with our media and with each other -- is changing as technology changes. But of course, that's always been the case. Before e-mail or the telephone, we relied on the postal service; before airplanes, it could take weeks or months to visit family in other states or countries. Before radio and the advent of television, we got our news from sources that might be months out of date.

As parents, however, it's hard to take the long view: We spend our time thinking about the foods our children eat, where they go after school, who they're hanging out with and what's on their minds. It's more important than ever to be mindful of what our children consume, not only at the dinner table, but also through the media.

A large part of parenting means teaching children about the world around them. What that means today is teaching them the proper ways to enjoy television and other media responsibly and critically, to understand the messages they're receiving, and to make sure they have the tools to make rational decisions about the entertainment they enjoy.

Read on to learn more about the ways television affects children's emotional state, including research into the ways that violence and other highly emotional entertainment can lead to behavioral problems.

Effects of TV Violence and Sex on Children

When media comes between parents and children, there's one assured effect: We have no way of knowing how our children are feeling. If we don't see when something's making them anxious or upset, we can't intervene. Though entertainment rarely takes the place of all social interaction, it's important to spend time with our children, interacting directly and with the TV off, as part of the daily routine.

Then there's the usual question of our children's health: Obesity, Attention Deficit Hyperactivity Disorder (ADHD) and other disorders have been linked to excessive media consumption. In fact, some controversial research suggests that TV viewing may cause underlying tendencies toward autism to surface [source: Waldman et al]. Sex on TV is a concern, too. Even many shows geared toward kids can have sexual themes, making sex seem like no big deal, and some have blamed shows about teenage pregnancy for leading to real-life teen pregnancies.

As far as exposure to violence, the research can still be pretty scary. It's estimated that an average child will have witnessed at least 13,000 murders by the age of 16 [source: Wilson]. Of course, fairy tale and fantasy violence can be just as gory as war films or more troubling entertainment, so it's important to be sure that kids can discern the difference between stories and reality. (Hint: They can.)

And what about fear? In one study of college students, 90 percent were able to give details on a movie or TV show that had terrified them as children, and a full 26 percent claimed "residual anxiety" even as adults. Thirty-six percent reported avoiding real-life situations similar to the fictional events. In this study, the students also demonstrated greater and longer-lasting effects the younger they were when exposed to the frightening material [source: Wilson].

Violence on television has been linked to aggression and slowed moral development in some children, but again, these findings are criticized as forgetting to take other household and emotional factors into consideration. In fact, one study showed that television violence only increased aggressive behaviors in children who had already shown such problems [source: Wilson]. In any case, it's clear that a web of circumstances contributes to larger issues: Blaming the television for health or behavioral problems is oversimplifying, which is no help to kids.

So what steps should we take? And is there any good news about TV? 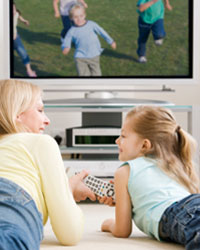 It's a good idea for parents to watch TV with their children so they can discuss what they see.
BananaStock/Thinkstock

By giving children the tools to experience media in a mindful way, we can turn television into a positive experience. The fact is, TV provides a wealth of emotional knowledge and wisdom when our children know what they're looking at.

As parents, watching alongside our children, engaging in both the entertainment and discussions about what we're seeing, can bring out the full educational potential that television offers. When we talk to our kids about what they're watching, what might happen next or what the characters are feeling, we're using the TV to give our children valuable insight on the nature of emotion and socialization.

One study shows that children, having experienced distressing entertainment, coped with the trauma by seeking to understand it. In the end, this means a better understanding of both the world and self, but it requires the guidance of a parent or caregiver. We might not always like what television shows us -- sometimes, there's no value at all -- but when we're engaging with kids, even those realizations can be valuable [source: Fatum].

Several studies have shown that, depending on age, children grow more capable of empathizing and understanding the emotional states of characters in their favorite shows. Interestingly, while even preschoolers could understand and empathize with television characters, they were shown to retain this information better when it related to live-action characters over cartoons or puppets. Older children remembered emotional content better when they found the stories more realistic, too: In both cases, greater empathy developed the more the child identified with the character [source: Fatum].

By recognizing visual and tonal signs of emotion, and considering what the characters might do next, kids develop their EQ, or emotional quotient: a key factor in overall intelligence, and one that will prove invaluable as they grow. Developmental psychologists and media scholars have argued that screen media play a crucial role in children's emotional development, but much research still focuses on media's connection to more antisocial behaviors [source: Fatum].

By involving ourselves with our kids' consumption of entertainment, just as we try to monitor their food intake and social interactions, we not only get to know our children better (and enjoy more time with them), but we also get to be there to help them reach the biggest goal of all: becoming responsible, happy, social people.