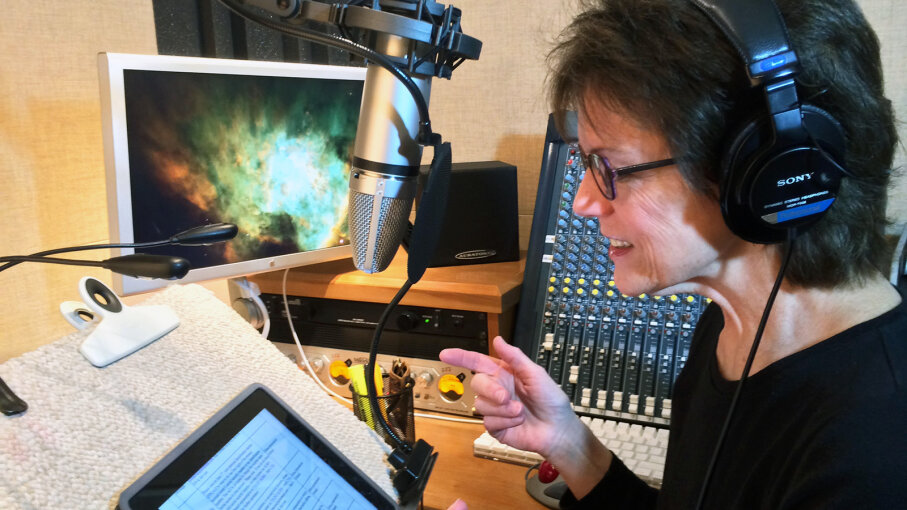 You may not know her, but you probably know her voice. That's because you've almost certainly asked her some of your most perplexing questions — and she's answered them. She's also guided you to many of your destinations. And she's might have even given you some serious shade on more than one occasion. Who is she? We're talking about Siri.

Much to the dismay of any tech conspiracy theorists who believe she's nothing more than a virtual assistant living inside all Apple devices, Siri is the vocal product of the very real, very human, Susan Bennett. The professional voiceover artist fell into the role of the original American Siri (Apple also released British and Australian versions, too) somewhat by chance, but she's been in front of a microphone for most of her career.

"It was pretty much accidental but it was also sort of in the cards because it was very related to music," Bennett says. "I've been playing piano since I was 4 and I took lessons for many years. I ultimately became a professional musician, a singer and keyboard player."

Like most ambitious creatives, Bennett took on a variety of side hustles, singing advertising jingles and providing backup vocals for musicians. During one particular session, a voice actor booked for a gig didn't show up. "The owner of the studio said, 'Susan, you don't have an accent. Come over here and read the copy.' And I thought 'oh I can do this,'" she says. "I read the copy and did well and thought, 'this could be something to add to my freelance things to make a living.'"

Born in Burlington, Virginia, Bennett now lives in Atlanta with her musician husband (she has one son, a photographer in Los Angeles, with her first husband, a professional hockey player). While she's no longer the voice of Siri (Bennett says Apple started tweaking the tone with iPhone 5s in 2013 and gave it a full overhaul with OS11 in 2017), she's definitely busy, doing speaking events around the world and performing with two bands — Boomers Gone Wild and Canyon Ladies. She also found time to squeeze in this Q&A with us.

How'd you get the Siri gig?

Because I was a freelancer, I did a lot of commercial work, narrations for film and documentaries, and I ended up doing a lot of messaging work...the kind of stuff you hear on phones. One day the script was very weird and it was a new thing. Ultimately I found out it was called IVR, interactive voice response or TTS, text to speech, which is the language of virtual assistants. None of us really knew that this stuff would end up being Siri and Alexa and Cortana. So when I found out I was Siri on Oct. 4, 2011, when she appeared, it was a huge surprise. A friend emailed me — a fellow voice actor — and said, 'hey we're playing around with this new iPhone app, isn't this you?' And I listened to it and I just said "whaaaat? Who is this person?!"

Siri was first released by Apple on Oct. 4, 2011 for the iPhone 4S using the voice of Susan Bennett.
Flickr/CC BY 2.0

You didn't know before that?

I had not [recorded] directly for Apple but for a company called Nuance — they're the biggest IVR company in the world. Apple bought our voices from Nuance without our knowing it. That is problematic from a voiceover actor's point of view. When you're doing messaging work or GPS work, people are just looking for info, they're not going to notice your voice unless you're a celebrity or you talk funny. But suddenly your anonymous voice becomes a character like Siri. And people, whether they realize it or not, know your voice, so it really affects other work you are capable of doing.

It took me almost two whole years to reveal myself as [Siri] because I knew I'd be stereotyped and typecast. And then finally when I did, what I suspected to happen did come to pass, but there were other really amazing opportunities that came along with it.

Did people start to recognize your voice?

Some people did and some people didn't. Even some voice actors who typically have a good ear didn't know [it was me] because the original voice — this is my regular speaking voice — of Siri [goes into Siri voice] kind of talked down here like that. Of all the years that my voice was on the phone, only two people recognized it.

How exactly did the recording process work?

That was in 2005 but Siri debuted in 2011. Did you wonder what those recordings were for?

I really didn't think about it. They were just some scripts for a liaison company that I still work for. I've talked to a lot of other original Siris, and we've all had the same experiences. We were just recording these unusual scripts we thought were just for phone systems. I guess you could call Siri a very sophisticated phone system — but she's a lot more than that.

You're not the current voice of Siri, correct?

No, they totally changed the sound of Siri. My voice was just the original voice on the 4s and the 5. But now it no longer sounds like Apple because [Siri] sounds like everyone else. The original Siri voice had a lot of character; she had a lot of attitude. The first time I spoke to her I said, 'hi Siri, what are you doing?' And she very disgustedly responded [goes into Siri voice], 'I'm talking to you.' I said 'Oh OK bye Siri, bye!'

How did the rights to your voice and the payment structure work?

We were paid for the amount of time we spent recording but not at all for usage. The only way I've been able to get any payment for it, really, is through my speaking events, but I'm very grateful to have been the voice of Siri. She's very iconic; it's led to a whole new career for me.

Do you use Siri?

When it was my voice, it was too creepy. I was used to hearing myself on radio and TV commercials, but to hear it come out of this computerized phone was just too much. And to tell you the truth, I don't use her now. I'm just not very tech-friendly. Given the option, I will almost always go old school.

Editor's note: Some of Susan Bennett's responses have been edited for length and clarity.

Now That's Interesting
Siri isn't the first opportunity Susan Bennett had to lend some humanity to technology; in the mid-70s, she provided the voice for Tillie, a persona developed for newly launched automated teller machines (aka ATMs) to make people feel more comfortable about withdrawing cash from inanimate objects.