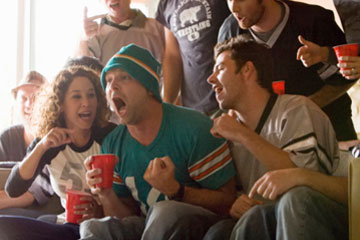 Who doesn't enjoy watching the big game with a group of friends? Sports channels can be a huge money-maker for cable networks.
Sean Murphy/Lifesize/Thinkstock

There is also the fact that certain channels and programs simply don't succeed in a given market -- or aren't allowed to do so. For example, if you live in China, you won't be watching "Baywatch" or "The Real Housewives" anytime soon. Similarly, controversial channels may not get enough market share to justify a cable company paying for the license; in extreme cases, consumer groups in a particular region might lobby against having the channel available at all.

Conversely, there are often governmental incentives to produce and broadcast local or regional programming: In Canada, at least 60 percent of all programming (50 percent of the primetime hours) on each station must be Canada-produced "Canadian content." This is a culture-preserving imperative that means there are plenty of programs (of varying quality) that never make it south of the border, although most stations acknowledge that striking that balance is difficult: It also limits the amount of American imports the system can bear, which can make for some pretty competitive deal-making.

But consider the northern American emphasis on hockey, compared to the southern preference for football. Sports is an incredibly lucrative form of entertainment because it creates urgency, passion and regional pride: Without those ingredients, there's no reason to air the content. A National Hockey League (NHL) station would not be profitable for any but the largest cable providers, who could balance the profits gained and lost by hitting every hockey-loving household. The recent American embrace of World Cup soccer, on the other hand, proved to be a money maker for those cable providers who'd been paying attention to trends.

And finally, there are occasions when niche channels with parallel focus -- gay and lesbian interests, for example, or outdoor/hunting channels -- would each dilute the other, taking an already small sample of the audience and halving it further. Again, this represents a loss for the station, the producers of its programming and, more than likely, your cable provider, who paid for both but isn't getting the ad dollars it was expecting for either. In this case, you're probably getting the type of station you want, but not necessarily the specific programs you've been hearing about.