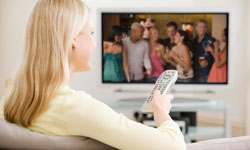 Today's DVR systems give you total control of when you watch your favorite TV shows.
BananaStock/Thinkstock

It's been awhile since the days of sitting down right at 7 p.m. to watch your favorite show. Most of us are familiar with time shifting since the invention of the programmable VCR, but the available technology has advanced a lot in the past decade. Almost any local cable company offers digital video recorder (DVR) services, which include a hard drive to record your favorite shows for playback any time.

While the advertising and television industries are still trying to figure out exactly how to pay for themselves in the absence of that long-ago captive audience, Internet and cable companies have been steadily increasing the variety of ways in which our television shows can reach us whenever we feel like watching them.

Time shifting is almost like having your own TV station, based entirely around your preferences, that you can watch any time you like. Let's take a look at the most popular time-shifting devices and services available right now.

The first DVR system, TiVo, was introduced in 1999 (along with a similar service called Replay that wasn't quite as successful). In this model, you pay for cable and any premium channels you want, which run through the TiVo box before reaching your TV.

This allows you to choose your programming from a very sophisticated menu system, record your favorite shows, receive recommendations based on the things you like and set a variety of recording options. You can search by actors or even subject matter, then set the program to record just once, every time there's a new episode or every time the show comes on.

A few years ago, AT&T released its own version of a similar service which was actually integrated into its cable-provider network, a system called U-Verse. That means you don't have to buy a separate device or subscription in order to get the same programming and recording power.

In both cases, the advantages are clear: The companies have spent so much time on their recording, recommendation and programming software that with a touch of a button, you can record reruns of your favorite shows on every channel, set rules on how many episodes to save, let the box determine what shows you might be interested in trying, and trust that the software will remember and learn about your preferences over time. It's a great way to learn about new shows while making sure that you never run out of recording space.

Cable Company-supplied DVR and On Demand 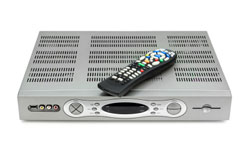 Most cable companies now offer DVR boxes for affordable prices along with their regular services.
iStockphoto.com/DonNichols

A few years after TiVo was released, cable companies began to offer several tiers of service to their customers, including their own version of the DVR box. While the options here are usually more limited, cable-company DVR offers a useful and fairly inexpensive way of making sure your favorite shows are available on your schedule.

While there's not usually as much attention to detail with the software -- most regulation DVR systems can't search by actor or subject matter, for example, or make recommendations in the sophisticated way that the subscription services can -- you can still set "season passes," check out an entire week's worth of programming onscreen, declare your preferences for how many episodes to retain, make sure you don't run out of memory and stay on top of similar concerns.

Cable companies also enter into agreements with specific channels and stations to make their programming available "on demand," usually for free. While the availability of shows varies widely due to the agreements made specifically for each show and can often give a pretty small window of opportunity to catch up if you've fallen behind, it's a risk-free way to learn about new shows or see an episode that you've missed.

Netflix is currently the most successful movie service online, offering both streaming video and mail-order DVD rentals. As a subscriber, you browse an extensive catalog of movies and TV shows and create a list, or queue, of the things you want to see. Plans exist for one or more DVDs at a time. The DVDs arrive, usually within a few days, you watch them whenever you can and return them free of postage, and the next items on your queue are sent out.

Recently, an all-online option has become popular as the availability of streaming movies and TV has increased. Entire seasons of television shows are online, and agreements with some premium and broadcast channels make some available almost immediately after they air.

If you're interested in streaming free TV in a timely manner, another option is Hulu. Programs from NBC, Fox, ABC and many other networks and studios are available for free, although the service is ad-supported. While many popular shows are available the next day, there are specific agreements dictating which, and how many, episodes of each show are available at any time. Many of these restrictions are removed for members of Hulu Plus, a paid subscription service. 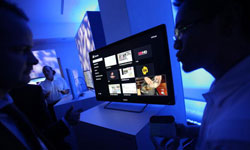 Sony's Internet TV, powered by Google TV, allows you to watch television and surf the Internet at the same time.
Mario Tama/Getty Images

For most of us, connecting our Internet service and television viewing is well on its way to becoming a reality. Since cable, broadcast and Internet all arrive over the same wires, new systems have been developed to bridge the gap and provide access to all your media at once.

Several systems now provide these services, either directly or through third-party dedicated devices, or as a feature of high-tech gaming systems like Xbox Live. Because many have specific features and connect to different media services, you'll have to research which works best for you.

For example, Boxee searches the Internet to find shows you're looking for, then streams them to your TV. Apple TV streams HD media from iTunes (for a price) and from your Netflix queue, as well as providing access to your own files, music and photos. Google TV connects to your TV, DVR and Internet, and then uses its search capacity to provide you with media from all three sources. Slingbox reverses the stream, putting your home's TV onto your computer or mobile device, while Roku streams your subscription services -- like Netflix, Amazon and Hulu -- to your TV, for about $60.

Lastly, illegal file-sharing remains a prominent part of Internet/television integration. Through peer-sharing networks, online video clip sites and torrents (peer-to-peer file sharing), it's possible to download copies of media files without paying for them at all.

The risk of viruses, spyware and other computer threats is high with these options since you're dealing with criminals, and you run the risk of being targeted for legal action by the studios in question, as well as having your Internet account shut down for illegal activity.

This activity increases the burden on studios -- already complaining about the loss of ad revenue to time shifting -- which means more technological backlash. Embedded programming like digital rights management (DRM) makes it harder to share things you love, even legally. The prices for episodes of your favorite shows on iTunes increase to make up for revenue lost to crime.

Worst of all, the loss of measureable viewers means your favorite show's chances of getting cancelled are higher. In avoiding all payment for your media, you're contributing to its downfall. While other time-shifted consumers may pay through ad-supported or subscription services, illegal downloaders are stealing money from the very creators, actors and musicians whose work they claim to enjoy.