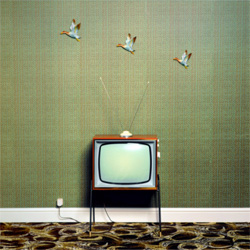 Image Gallery: Evolution of TV Nope, we don't miss it. Not the rabbit ears, not shuffling through the guide to see what's on and certainly not getting up off our bums to change the channel. See more pictures of TV's evolution.
Steve Taylor/Getty Images

When you think of the golden age of television, you probably think of actors and programs -- Lucille Ball, Walt Disney, Raymond Burr, "The Twilight Zone," and "Alfred Hitchcock Presents." But how people watched TV defines the era just as vividly. Remember when you had to leave the couch to "turn the dial" or plan what you wanted to watch by thumbing through a printed guide?

Thanks to the advent of digital technology, those days of limited shows determined by limited networks are long gone. Now your backlog of DVR'ed "Doctor Who" episodes is longer than the scarf the good doctor has been known to sport, and your TV can tap into the almost infinite amount of content available on the Internet. More important, digital technology enables viewers to watch exactly what they want to watch when they want to watch it. Bonus: It can display that content in stunning clarity and richness, too.

In this article, we'll channel surf through five technologies that make all of this customization possible. Within each technology category, we'll consider a typical setup, plus a few alternatives. One assumption before we go too far: Every solution on our list requires a high-speed Internet connection, either cable or DSL. The costs we provide won't include this, but, just for reference, you can expect to pay around $70 a month in the U.S. for the bandwidth necessary to handle audio and video streaming.

With that proviso out of the way, we're ready to start the show. First up is a technology that would have been considered an oxymoron just a few years ago.