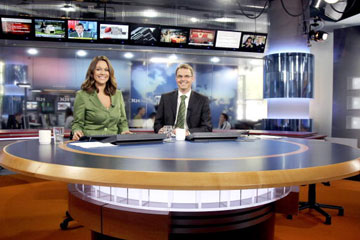 Now that news is on 24 hours a day, viewers get more than just the facts -- they get opinions, too.
Florian Seefried/Getty Images

In the beginning there was Cronkite. And it was good. The mighty Walter was "the most trusted man in America," and the CBS Evening News is how the nation got its daily dose of current events -- faster than waiting until tomorrow morning for the paper!

And then there was Ted Turner's Cable News Network, CNN, which flicked on its broadcasters in 1980. Suddenly, news producers needed to fill not only one half-hour time slot, but 48 of these time slots, every day. Is there really that much going on in the world?

The answer is a resounding no. At least not 24/7. And so, for the first time, CNN allowed viewers to tune in live to see if a schnauzer could be pulled from a truck stuck in floodwaters. Or, more precisely, it allowed viewers to watch O.J. Simpson speeding down a Los Angeles freeway in a white Ford Bronco. O.J. made the network, and a made network leads to imitators.

Fast forward to 2011: MSNBC, FOX News and the other 24-hour cable news stations now compete for viewers. But with these channels limited by the same world events over the same time period, how is a cable news station to elbow its way into the most households?

And so in this 24-hour news cycle, overblown stories reign supreme. The world of overblown news is a scary one, indeed. Every day the sky is falling, and then, miraculously, we wake up to find that it has not yet fallen -- but that today will surely be the day! But what happens when even more competitors get involved? Read on to find out.

Cable News vs. the Internet

What we talked about on the previous page is what happens when cable news stations start snapping at each others' jugulars. But with today's technology, the fight has gotten even fiercer.

Along came the Internet. The same news junkies who used to turn to 24-hour cable news to get by-the-minute updates have now defected to the Internet for second-by-second news. You can get exactly the news you're looking for faster online. So why watch cable news?

The answer is opinion. You can get the "what" much faster online, but it's trickier to get the "how" and the "why," plus that fun commentary on what you should think and what you should do about it. So 24-hour cable news necessarily started borrowing the tricks of 24-hour talk radio. It became not only sensationalized but also opinionated.

Sensational opinions are polarizing. Does cable news make you shout hallelujah or opposite, less church-worthy exclamations? No longer is there much room in the middle. No matter your political affiliations, you're sure to find an opinion you agree with and one that makes you cringe. Due in no small part to cable news, the distance between right and left in American culture has grown. And the factions are mad.

Interestingly, this culture of opinionated journalism that now provides the backbone of a cable news station's ratings may also prove to be their downfall. Walter Cronkite was "the most trusted man in America" and was therefore the face of the news. But can any one of the many current cable anchors make the same claim to trustworthiness?

To learn more about how TV has affected society, check out the links on the next page.