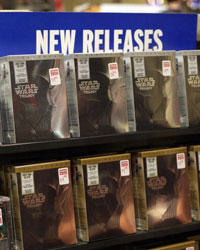 The Star Wars trilogy was re-released in theaters and later in DVD box sets, earning new fans and big bucks for the franchise.
Bryan Bedder/Getty Images

While new and revised releases of older films have always been a way for the industry and filmmakers to make new profits and show improved versions of their films, it's only in the DVD age that multiple versions and re-releases of films are possible on a large scale. Improvements in special-effects technology, for example, led to the mid-'90s theatrical release of the classic "Star Wars" trilogy.

Trends in the industry, such as run times for different kinds of films, also change over time. While romances and comedies are expected to run 90 to 120 minutes, period dramas and epics can often run well over the two-hour mark. The "Lord of the Rings" films, already known for being successful despite their long theatrical running times, were released in even longer formats on DVD to acclaim.

We also get to see behind the curtain of studio politics and industry interference with what's known as the "Director's Cut" of a given film, which is usually described as the version of the film the director would have liked us to see to begin with. Some directors, like Ridley Scott of "Blade Runner," can't seem to leave well enough alone -- a few years ago, a special boxed set was released which contained four different, complete versions of the film.