The Art of Special Features 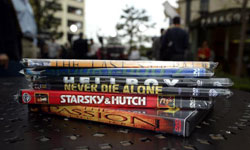 With a high storage capacity, DVDs have room for lots of special features.
Frazer Harrison/Getty Images

Of course, one of the most attractive things about the DVD was the sheer amount of recording space available. A VHS-quality digital recording of a regular film might only command 400 megabytes, while the most basic DVD format has 15 times that capacity.

From the beginning, DVDs have had menus and other interactive content, but producers were driven to find more ways to use that space. It makes the package more attractive and provides consumers with a greater variety of ways to enjoy the film.

The production of DVD-only features has become a major part of the industry and the filmmaking process for every film, even if it's never released by the studio to a regular theater. Now, when we buy a film on DVD, we expect these extra features -- a bare-bones version of a film carries a much smaller price point.

Today's DVDs can contain everything from interviews with the director, cast and crew to storyboards and special effects demonstrations. Links may be provided to alternate and deleted scenes, both from within the film itself and as additional small features. Many DVDs also contain voiceover tracks in which behind-the-scenes creators and actors offer their own commentary.