by Wesley Fenlon
Prev NEXT
1 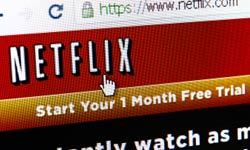 Netflix is the culmination of all those advancements brought about by broadband Internet access. When the company launched as a by-mail DVD rental service, it quickly rose to dominance over traditional competitors like Blockbuster. But Netflix really changed everything when it launched Instant Streaming; with the same monthly subscription used to rent DVDs, subscribers could stream select movies to their computers (and eventually game consoles, TVs, media streamers, and more).

Netflix Streaming's popularity grew so quickly that in 2010 it accounted for 20 percent of all downstream Internet traffic in the U.S. during peak usage hours [source: ReadWriteWeb]. That's a lot! But how does that affect the movie industry? Again, it's all about availability. For less than the price of a single movie ticket, Netflix offers instant access to hundreds of movies and television programs, and the available content is always expanding as Netflix secures new licensing deals. In the fourth quarter of 2010 alone, Netflix made $47 million in profits out of a total revenue of $596 million [source: DMNews]. Blockbuster, on the other hand, filed for bankruptcy in September 2010 with almost $1 billion in debt [source: LA Times].

More than any other content provider, Netflix has changed the way we watch movies. And it's changed our habits remarkably quickly: Instant streaming wasn't a major focus for the company until 2008 [source: LA Times]. As Netflix continues to offer subscribers more content for their entertainment dollar, movie theaters ask for more money to see a single movie.

Netflix and the other home-theater innovations we've discussed in this article demonstrate the best conveniences of all the modern technologies making theaters obsolete. In the coming years, theaters will have to work hard to find new ways to be relevant as tech marches on.