by Matt Cunningham
Prev NEXT
7

Response to the 2004 Indonesia Tsunami 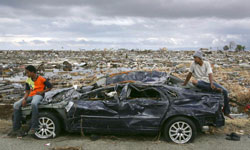 Television news coverage of the devastation in Indonesia following the January 2004 tsunami led to an outpouring of donations and help from viewers.
Dimas Ardian/Getty Images

On Dec. 26, 2004, an undersea earthquake with an estimated 9.0 magnitude sparked a massive tidal wave, or tsunami, in the Pacific. The wave hit Indonesia with little advance warning, wiping out entire communities and killing an estimated 280,000 people. Television news stations broadcast jaw-dropping images of the disaster and its aftermath, interspersed with graphics and commentary that explained the "how" of the disaster to viewers across the globe [source: Bolton Council of Mosques].

And those viewers responded. Within days, scores of charities and aid groups were flooded with donations and offers of help. Highly advertised fundraisers and celebrity telethon events made people aware of both the disaster and the generous donations to its victims. While the diversity of the international response makes it impossible to know exactly how much was raised, estimates put the amount of financial and material aid somewhere near $14 billion [source: BBC].

Without live international broadcasts and widespread viewership of cable news programming, it's possible that word of the tsunami's devastating effects would have taken much longer to reach across the world, slowing the aid response. Television may receive a bad rap for promoting a sedentary lifestyle and exposing people to violent or misleading images, but it can also be a powerful instigator for positive change [source: DoSomething.org].