by Matt Cunningham
Prev NEXT
1

The Opening Ceremonies of the 1939 World's Fair 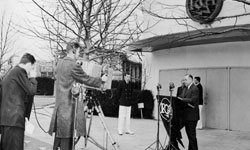 RCA Chairman of the Board David Sarnoff dedicates the RCA Building at the World's Fair in New York in 1939.
Archive Photos/Getty Images

In terms of broadcast TV history, this is where the story begins.

In the late 1920s, manufacturers such as Radio Corporation of America (RCA) were producing consumer-grade TVs that, while expensive and considered luxuries, began appearing in more and more households in America and Europe. But the other half of the TV equation -- regular broadcasts -- hadn't yet caught up with television set technology. If there was nothing worth watching, the manufacturers would have a hard time selling televisions.

RCA moved to remedy this situation in the late 1930s with the development of the National Broadcasting Corporation (NBC), its TV broadcast initiative. NBC developed and acquired broadcasting and transmission technology, and in 1939 was ready to make the leap into regular TV broadcasting.

NBC launched in grand style. On April 30, 1939, its TV crews arrived at the World's Fair in New York City with broadcast vans packed with the latest TV technology. NBC's cameras were rolling as President Franklin D. Roosevelt opened the fair; the signals moved from the mobile broadcasting trucks to a tower atop the Empire State Building for aerial transmission, and early technology adopters in the region watched the first live TV broadcast.

Other manufacturers launched TV sets and receivers at the World's Fair, and the market grew rapidly; by the 1940 World's Fair, space delegated for TV technology displays had doubled, and television was on its way to becoming a world-changing medium.