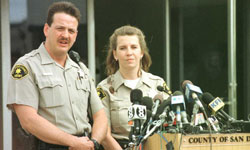 In 2005, the show "CSI" did an episode called "Shooting Stars" about a suicidal cult. It may seem unbelievable that a group could convince all its members to voluntarily commit suicide together, but history unfortunately has a few examples.

The "CSI" episode was based on the cult known as Heaven's Gate. Formed in the 1970s by leaders Marshall Applewhite and Bonnie Nettles, they were able to attract hundreds of members at certain points. The leaders had bizarre ideas about their own extraterrestrial origins, believing that they had taken on human form. They also promised that people would be delivered to "God's Kingdom" if they gave up their lives, families and even their names to join the cult. They also preached that all members needed to abstain from alcohol, drugs and sex.

Although the cult only consisted of 39 members by 1997, they all proved they were committed to the leaders and their message. The coming of the Hale-Bopp comet was a sign to them that their mother ship would arrive to take them to their celestial home. Over three days in March, they all took part in a carefully orchestrated mass suicide. Members wore identical clothing and took lethal doses of barbiturate phenobarbital mixed into pudding or applesauce. They individually videotaped themselves before the ritual, explaining that they were going to a better place.