by Chris Warren
Prev NEXT
3

It's Best to Work in the Dark 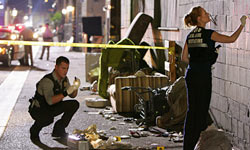 The "CSI" team surveys a crime scene in near darkness, a no-no in the real world.
CBS/Sonja Flemming/Landov

The original "CSI" and its sister show in Miami -- not to mention "NCIS: Los Angeles" -- are set in locales with abundant sunshine. Yet watching certain episodes of these programs leads one to believe they were filmed by agoraphobics. Indoor scenes at the CSI labs in both "About Face" and "Appendicitement" look like they're set in nightclubs, with shelves of bottles filled with brightly colored liquids backlit by blue light. When the "CSI" team stumbles upon the dead body in the barbecue restaurant in "Appendicitement," they opt to use their flashlights, even though there is a huge neon sign blaring out front -- a pretty good indication that there is power [source: tv.com].

While mood lighting is evidently good TV, it's crummy for proper crime scene investigations. A crime scene examined at night would never be fully wrapped up until investigators had the opportunity to search it in the daylight [source: Farquhar]. Among the standard tools in a CSI van are light sources, like flashlights and flood lighting, and most CSI labs are located in government buildings, where the fluorescent lights wouldn't turn off if you wanted them to [source: Clutter].