by Chris Warren
Prev NEXT
8

A Crime Scene is a Free for All 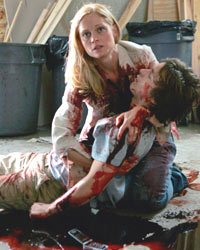 This scene from "Law & Order: SVU" shows a murder victim being cradled, which would almost never happen in reality.
NBC Universal, Inc.

On an episode of "CSI: Miami" called "About Face," the murder of a college student has the team of investigators worried about the return of a suspected serial murderer. Still, the scene at the victim's apartment looks more like a keg party, with lots of people roaming around and only a fluttering yellow police tape as a reminder that something bad happened [source: cbs.com]. The reality, however, is that access to crime scenes is very limited, be it to the general public, family members or other law enforcement personnel [source: Farquhar]. Why? It's all about maintaining the integrity of any evidence at the crime scene, and to do that you have to establish a perimeter to prevent anyone from gaining entry to the area. Everyone has to sign in with an officer and have a legitimate purpose for being there [source: Farquhar].

Keeping an area secure means potential suspects can't remove anything incriminating and the media can't take photos of what might become key pieces of evidence. Even chiefs of police can't just wander around a crime scene without good reason.

Keep reading to learn why the demands of an hour-long TV show skew the real pace of CSI work.