by Chris Warren
Prev NEXT
9

They're Adept at Crime Scene Investigation 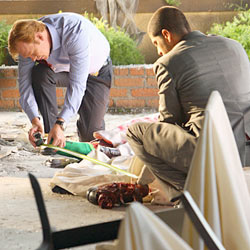 It's actually against the law for a CSI to touch a dead body because it's under the jurisdiction of the coroner.
CBS/Monty Brinton/Landov

Here's what someone could assume to be the normal, professional procedure at a murder scene if their only evidence was what is shown on TV: Upon seeing a dead body, the first thing a CSI does is move it around to get a better look at it, examine it for gunshot wounds and look through the victim's pockets for identification. That is more or less what happened in "Appendicitement," an episode of "CSI" from season 10, in which, among other things, four of the CSIers happen upon a dead body at a shuttered barbecue joint [source: tv.com].

Wayne Farquhar, a nearly three-decade veteran at the San Jose Police Department and author of "Blood Over Badge," watched this episode and called the depiction of how a crime scene is handled "absurd and criminal" [source: Farquhar]. Farquhar says the proper thing to do would to be back away from the body and secure the building, making sure there aren't other suspects or victims around. And the CSIs would never touch the dead body. "For them to handle the body is against the law," he says, noting that a dead body is under the jurisdiction of the coroner's department. "Even if I see a wallet in the back pocket, I can't remove that wallet and examine it."

Click ahead to read why it's not "anything goes" at a crime scene.