by Gerlinda Grimes
Prev NEXT
7 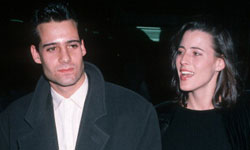 These days, subversive, morally ambiguous television protagonists are fairly commonplace. Mob boss and loving family man Tony Soprano tried to smother his mother with a pillow. Dexter is a serial killer, but he only kills murderers. Maybe writers for "The Sopranos" and "Dexter" took the lessons of "Profit" to heart when they made their characters likable, despite their moral shortcomings.

Jim Profit, played by Adrian Pasdar, was not a likable guy. For instance, the fact that he gets revenge on his abusive father by setting him on fire relieves his the view of any tender feelings he or she might have hoped to feel for him.

A cold, unflinching sociopath, Profit lies, cheats, steals and manipulates others into doing despicable things in order to climb the ranks at multinational corporation Gracen & Gracen. At the end of each morally bankrupt day, Profit retreats to his bachelor pad, where he strips naked and takes refuge in a cardboard box. Writer David Greenwalt hypothesizes that "what might have turned off viewers to 'Profit' wasn't just that it was so different [from other shows of the time] but that it was such an affront to it." Fox aired only four of the show's nine planned episodes before yanking it from their lineup.

Four episodes and an out-of-print DVD release weren't enough to kindle the fires of fandom, and today, "Profit" remains largely forgotten. However, because its influence is still very much alive in dark shows like "Nurse Jacky" and "Nip/Tuck," "Profit" can still be classified as a solid cult hit.

After the break, we make the leap from sinister to science fiction as we explore a beloved creation from Joss Whedon.