by Beth Brindle
Prev NEXT
3 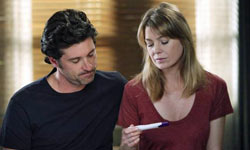 When "Grey's Anatomy" debuted in March 2005, the series wasted no time jumping into the complicated relationship between its two central characters [source: ABC.com]. The first episode opens on the morning-after of new surgical intern Meredith Grey's (Ellen Pompeo) presumed one-night stand with a handsome, seemingly random stranger whose name she can't remember. He's late for work; she's late for the first day of her internship, and surprise! The handsome hookup turns out to be none other than Derek Shepherd (Patrick Dempsey), who we now learn is the hospital's attending neurosurgeon and, yes, Meredith's boss. He's eager to continue their relationship; she's got major commitment issues, but apparently very little willpower, and they continue to meet in secret throughout the first season…until the final episode, when Meredith learns (along with the viewers) that Derek has a wife.

Over the next two seasons, Meredith and Derek embark on a storyline to rival a daytime soap: He reconciles with his wife, only to find that he can't stay away from Meredith. He divorces his wife, Meredith dates someone else. Meredith nearly drowns, Derek saves her. Fast forward through two more seasons, lots of second guessing, a little bit of therapy, and several personal crises, to find the perpetually indecisive couple finally committing to one another by exchanging vows written on sticky notes [source: ABC.com]. Now in their seventh season, Derek and Meredith seem to be comfortable in their relationship with one another, but then again, the marriage has never been legitimized, so their future is anyone's guess.