by Beth Brindle
Prev NEXT
5 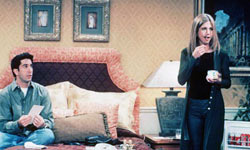 Ross and Rachel's frequent breakups and misunderstandings proved to be more fun to watch than their so-so chemistry as a couple.
Handout/Getty Images

Between Ross's Ph.D. in paleontology and Rachel's unapologetically shallow interest in appearances and fashion, this on-again, off-again pairing reads like the inspiration for the short-lived reality show "Beauty and the Geek." We learn early in the series that the somewhat awkward Ross (David Schwimmer) has always pined for the popular, attractive Rachel (Jennifer Aniston). He eventually won her over with his kindness, and their long-awaited first kiss was satisfying for viewers. But their frequent breakups and misunderstandings proved to be more fun to watch than their so-so chemistry as a couple.

Throughout the course of their several-year relationship, Ross and Rachel get together, break up, accidentally get married, just as quickly get divorced, accidentally videotape a secret tryst during which their child is conceived, live together as friends to raise their daughter, live apart as friends to raise their daughter, and are apparently on track to live happily-ever-after in the final episode, when Rachel gives up her shot at a dream job in Paris working for Louis Vuitton so that she can stay in New York with Ross.