by Beth Brindle
Prev NEXT
9 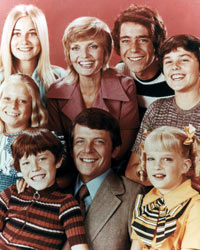 For many children of the 1960s and 1970s, "The Brady Bunch" offered the first televised glimpse into a "blended" family consisting of step-parents, stepchildren and step-siblings. And what a glimpse it was! Father and stepfather Mike Brady (Robert Reed) was always there with a "homily that would explain to the children the lessons they had learned," while mother and stepmother Carol (Florence Henderson) reacted to the weekly antics of the six children with a knowing smile and a shake of her head [Griffin]. The children, ranging in age from grade school to high school, came to accept the wisdom in their parents' advice by the end of each show and resolved their sibling rivalries within the course of an episode.

The original five-year run of the series began in September 1969 with the wedding of widower Mike Brady to single mother Carol Ann Tyler Martin. While Carol's single status is never explained on the show, series creator Sherwood Schwartz later said that he considered her a divorcee, but the network rejected the idea as too controversial [source: ABC News].