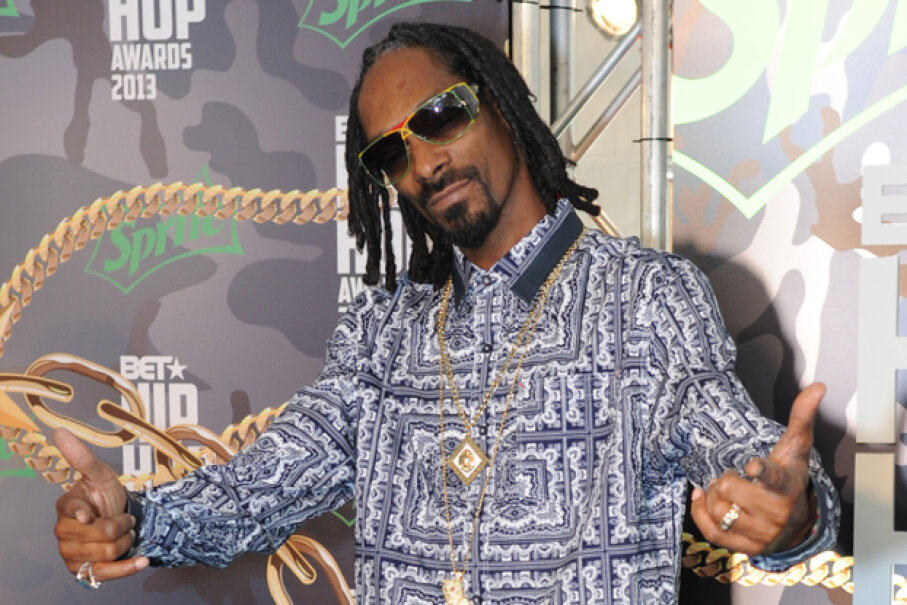 Is it a "doggy-dog" or a "dog-eat-dog" world? Chris McKay/WireImage/Getty Images

The English language is awash with sayings and phrases that cover everything from new beginnings ("back to square one") to endings ("kick the bucket") and just about everything in between. Many reflect not only the development of the language over the course of history -- the old saw about never looking a gift horse in the mouth can be traced back to the 13th century -- but also the story of our shared experiences [sources: Grammarphobia]. After basketball star LeBron James told the world he was signing with the NBA's Miami Heat in 2010 by saying, "I'm taking my talents to South Beach," the phrase took on a life of its own. It was used to describe subjects as varied as a night at the pub ("I'm taking my talents to Moe's"), breakups ("I'm taking my talents to [insert new significant other's name here]"), or even resignations ("I'm taking my talents to Initech") [source: D'Angelo].

The problem is that many people who use these phrases wind up throwing the baby out with bathwater by flubbing and butchering the particular saying so badly that it means something else entirely or nothing at all. Some of the most common expressions are also some of the most commonly confused. (Is that a statue of limitations, or a statute?)

They say knowledge is power (or perhaps powder). So read on to master some of the most regularly used phrases that are regularly said wrong.

Not Worth a Grain of Salt 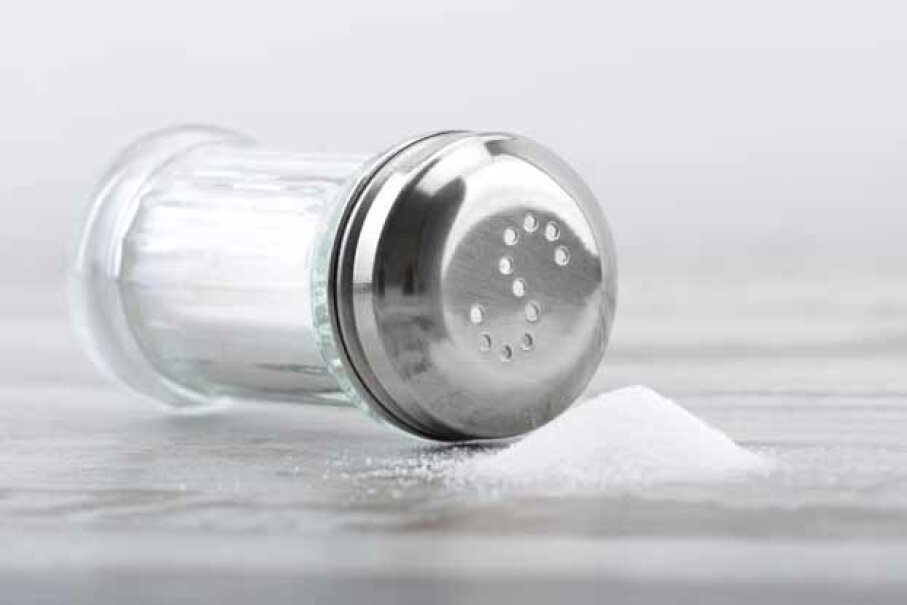 You can trust the info in this article with more than a grain of salt. iStock/Thinkstock

This misstatement is likely caused by a mix-up between two common phrases: "worth his salt" and "with a grain of salt." The former refers to a person who is deemed of good stock and fine, upstanding character. Early Roman soldiers earned an allowance of salt for their efforts, and a soldier who was "worth his salt" was one whose performance was up to snuff. (The Latin word for this allowance, salarium, is where we derive the word salary) [source: Mussulman].

The latter phrase means to accept a statement while remaining skeptical about whether it's actually true. It refers to the idea that food is more easily swallowed when taken with a tiny bit of salt [source: The Phrase Finder].

I Could Care Less 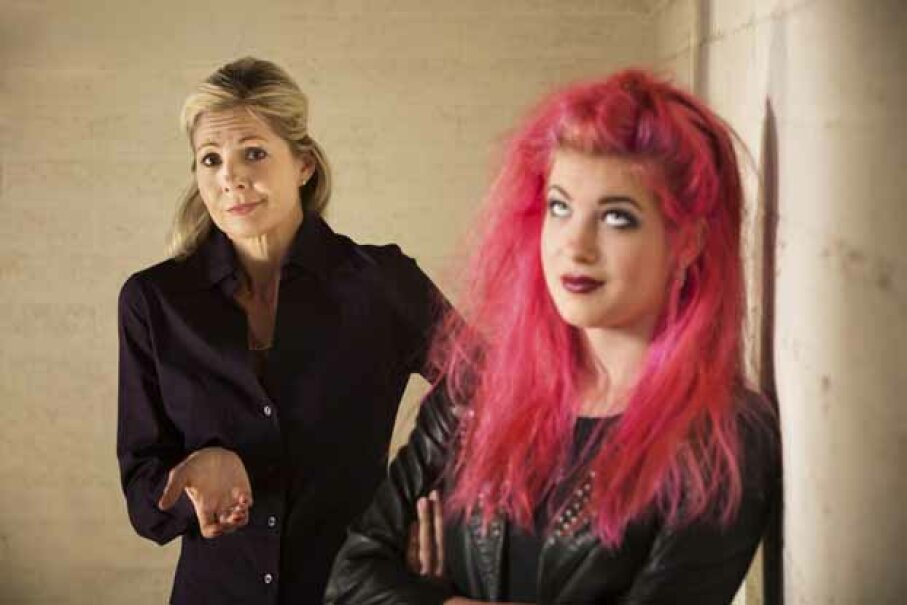 If you tell her, "I could care less," she'll think you care a little bit. iStock/Thinkstock

How much less? The phrase, when used properly, is meant to convey the idea that the speaker is completely and utterly uninterested in the topic being discussed. In the garbled version the message of absolute disinterest is lost.

"I couldn't care less" came from the British in the early 1900s, but around the 1960s, Americans inverted it to "I could care less." No one is sure why. Perhaps it was an attempt at sarcasm that's been lost because what you're really saying is while you don't care about the topic, there are others about which you care even less [sources: Washington State University, Qunion]. 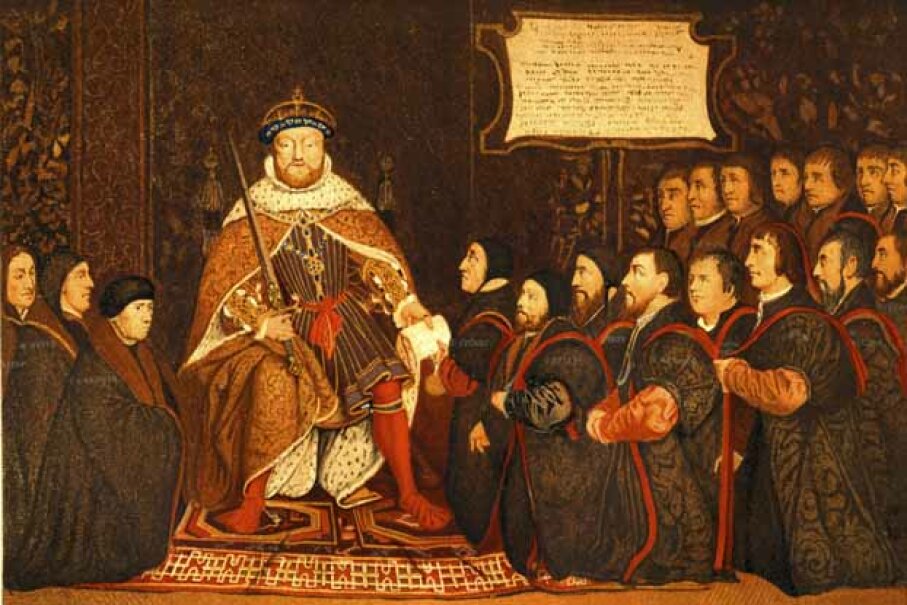 "All intents and purposes" is a 500-year-old turn of phrase coined in an English Act of Parliament by King Henry VIII. It actually stated, "to all intents, constructions and purposes" and meant "in every practical sense." It was shortened to the popular version in 1709.

The butchered form -- "all intensive purposes" -- sounds similar, which is probably the reason it's been popping up in newspapers and everyday speech since as early as 1870 [sources: Expect Labs, Safire]. 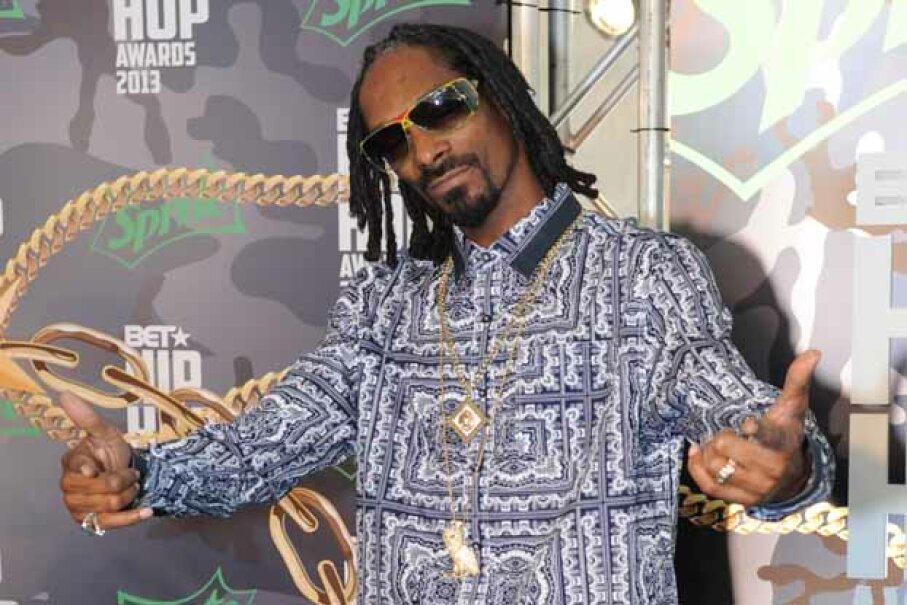 For a lot of people, it's Snoop's world, and we just live in it. Chris McKay/WireImage/Getty Images

The saying is actually a corruption of the Latin phrase canis caninam non est, which states that dogs do not eat each other. Nevertheless, "dog-eat-dog" is meant to convey the viciousness or "every man for himself" nature of life and society [source: Paton]. So leave out the "doggy" unless you're a die-hard Snoop Dogg (now Snoop Lion) fan and believe it's his world and we just live in it. 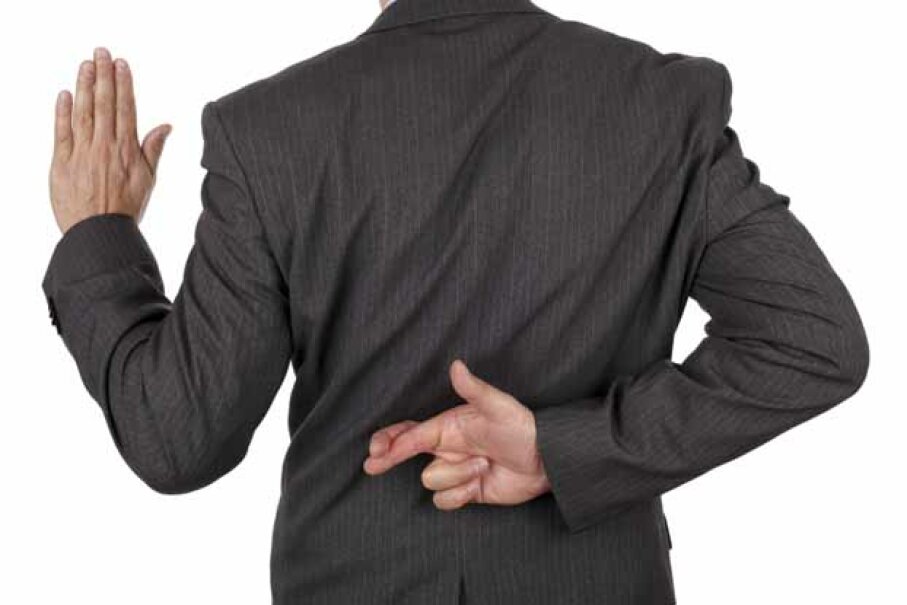 Many lies are both bold-faced and bald-faced, but the terms are not synonymous. iStock/Thinkstock

Bald-faced or bold-faced? This is one of those commonly flubbed phrases in which both versions sound a whole lot like one another. In fact, they're both correct; they just happen to have two slightly different meanings.

A bald-faced lie -- or barefaced, as it's often called in England -- means one that is undisguised and clearly untrue. A bold-faced lie, on the other hand, is one that is impudent or disrespectful [source: Grammarphobia]. Many lies would fall under both categories. 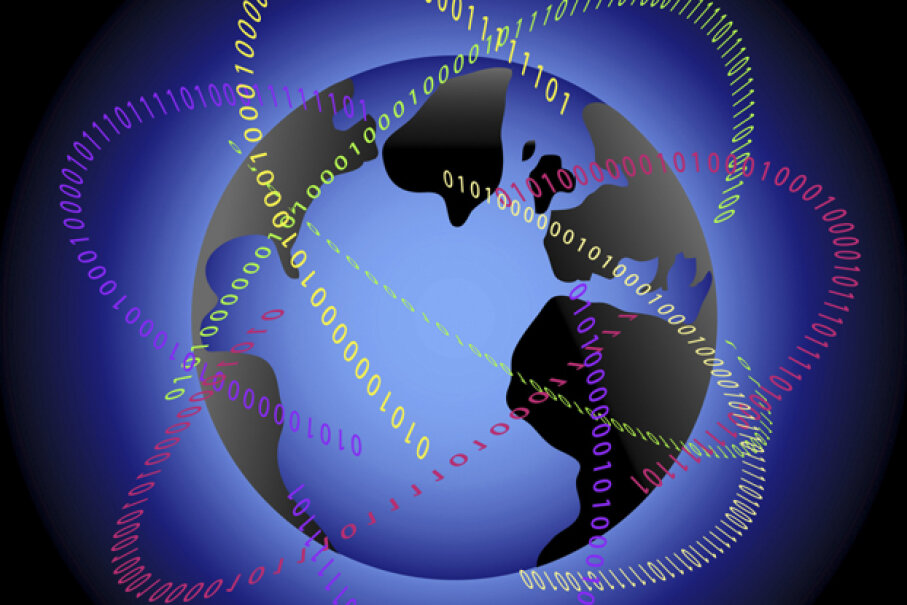 360 degrees represents a complete circle back to the beginning. A complete change would be 180 degrees. Purestock/Thinkstock

Except if he's right back where he started, that's probably not what you mean. Degrees aren't only a way to measure temperature and angles; they're also clichés writers and sportscasters use to describe everything from major life changes to spinning slam dunks on the basketball court. The problem is that these terms are regularly misused.

A complete circle is 360 degrees. So, if you want to describe someone who has "come full circle," you might say he has made a 360-degree turn. A half circle, meanwhile, is 180 degrees. This is the phrase one might use to describe a complete change from one extreme to another. A shy wallflower that busts out of his shell and becomes an extrovert overnight might be said to have made a 180-degree change. If he later reverts to his shrinking violet ways, he has gone 360 degrees, landing back in the same position he started from [source: Gray-Grant].

I Literally Froze to Death 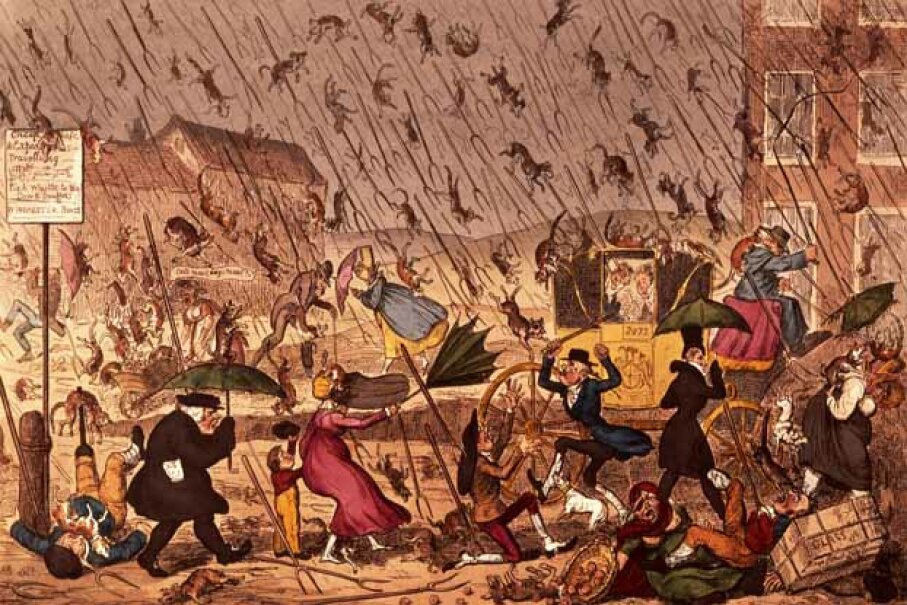 Here's a picture where it is literally raining cats and dogs. And pitchforks too. George Cruikshank/Bridgeman Art Library/Getty Images

Oh really? Then how is it you are alive and able to utter this nonsense?

The word "literal" has a very clear meaning: "actual or without exaggeration." Yet, it is far too often used to add emphasis to a situation and exaggerate a certain scenario that could not possibly be factual: "It was literally raining cats and dogs." "My phone is literally blowing up."

The correct word in these and a whole slew of cases in which you don't really mean literally -- your phone is not a ticking time bomb, or is it? -- is "figuratively." As in, "I was figuratively foaming at the mouth, I was so angry" [source: Grammarist]. But we have to admit, that does sound a little weird.

I Pawned Her Off on My Friend 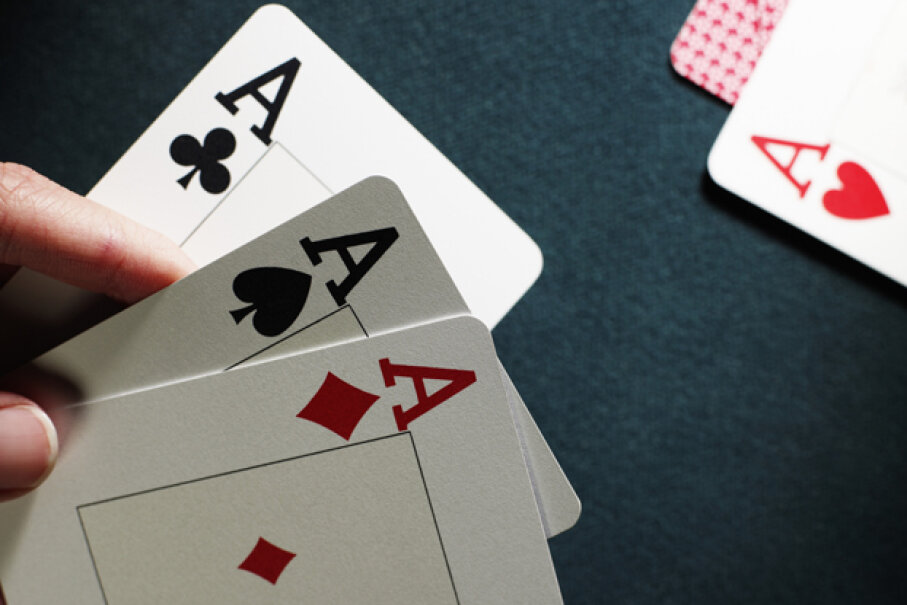 The phrase "palm off" came from deception while playing cards. Michael Blann/Digital Vision/Thinkstock

To understand why this phrase is incorrect, you first have to understand what it means to "pawn" something. A pawn shop owner is basically a low-level lender: One pawns an item -- electronics, musical instruments, microwaves -- to the owner (also known as a pawnbroker) in return for money. The person who pawned the item can get it back if he pays back the money, with a certain amount of interest, within an agreed-upon time limit [source: National Pawnbrokers Association].

Thus, the phrase "pawn off" should be used only when referring to trading an item as collateral for a loan. That hasn't stopped people from confusing the saying with the similar-sounding "palm off," which means to get rid of something or someone by means of deception [source: Macmillan Dictionary]. This phrase likely came from card-playing and concealing cards in the palm of your hand. 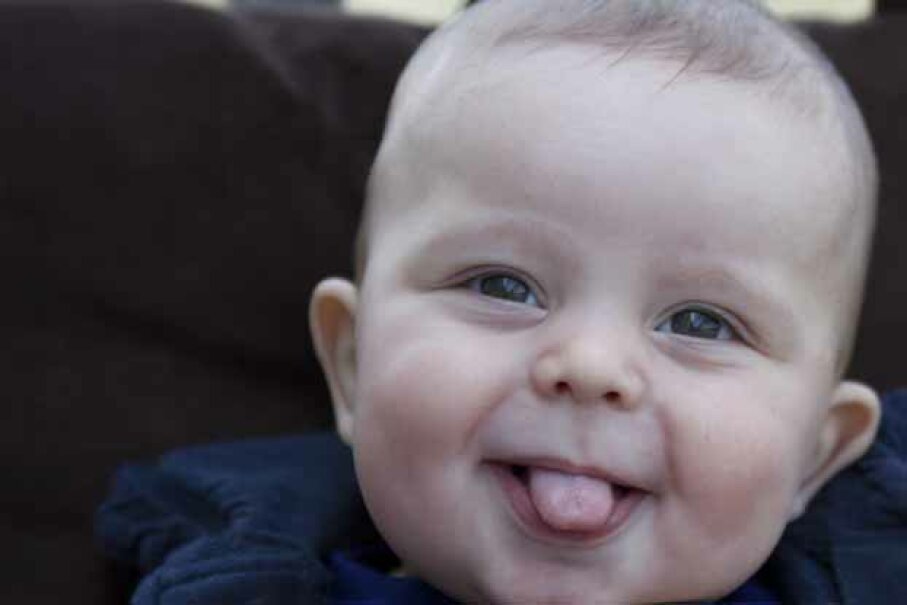 A cute example of "tongue and cheek." "Tongue-in-cheek" would not look so cute -- but it would be more accurate. iStock/Thinkstock

To say something "tongue-in-cheek" is to say it in an ironic, kidding or nonserious way. A nonliteral way, even. It is commonly believed that the saying is derived from the 18th-century practice of actually placing one's tongue against the inside of one's cheek after saying something to show that it's intended as a joke [source: Education Bug]. The phrase "tongue-and-cheek," therefore, doesn't make sense, despite its wide use among those unfamiliar with the origin of the appropriate phrase [source: Grammarist]. 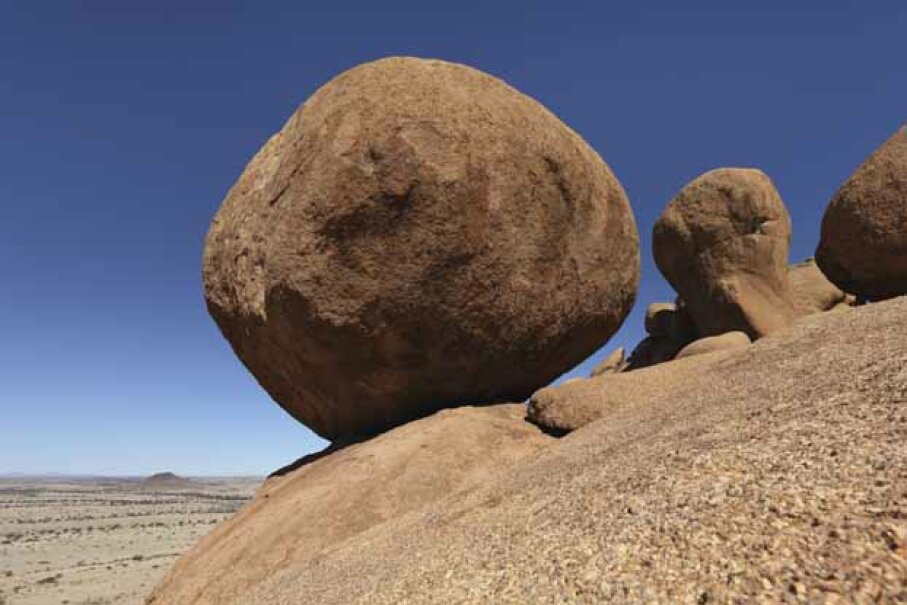 If you're "taken for granite" that would mean you're mistaken for one of these rocks. Pretty unlikely. moodboard/Thinkstock

Unless you're a geologist or work at a rock quarry, the word you're looking for is "granted." To take something for granted is to assume that you are entitled to it (money, a job, a friend or significant other) without question or to simply fail to appreciate its value [source: Collins Dictionary]. To take something for "granite" can only mean to assume that the person or thing is actually a piece of igneous rock.

"Hold me closer, Tony Danza." I may commonly confuse, misstate and garble song lyrics, but I'm still not ready to believe that Elton John is saying anything other than that on a little ditty commonly known as "Tiny Dancer." To the extent I'm ever ready to admit that I may have the words wrong -- "hold me closer tiny dancer," some claim it goes -- I hereby call for the lyrics to be permanently changed. I don't know who this tiny dancer fella is, but he certainly hasn't accomplished anything on the level of "Who's the Boss?"