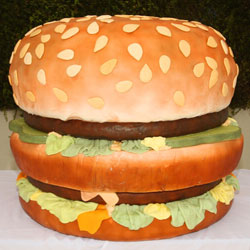 OK, maybe it's a little offensive, but the joke goes like this:

Grover is driving a bus down Sesame Street, picking up kids on the way to school. First, he picks up twin girls, Patty and Pattie, neither of whom does much to allay fears of the American obesity epidemic. Next, he stops for the notorious Lester Cheese, who after taking a seat immediately takes off his shoes and starts picking his bunions. Grover stops for Ross' wheelchair, but the mechanical lift is on the fritz and by the time Grover finally gets to school, he's horribly late. The principal, Big Bird, asks Grover why he's so late and Grover replies (wait for it ... wait for it ... OK, cue the music), "Two obese Patties, special Ross, Lester Cheese picking bunions on a Sesame Street bus!"

Admit it -- you know the tune. And also admit that you know the real words. How could you not? This is the catchiest commercial jingle of all time.

Now that we've filled your head with an unending stream of jaunty jingles, check out the next page for links to more fun articles.