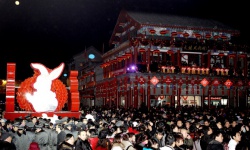 The Lantern Festival is held on the 15th day of the first lunar month in China -- the last day of the Chinese Lunar New Year celebrations. See more pictures of Beijing.
Lintao Zhang/Getty Images

How do you plan on celebrating New Year's Eve this year? Will you run around the neighborhood, chucking old dishware at people's front doors? If you live in Denmark, you might do just that. Or perhaps you'll pick some famous person or event that made a splash in the news during the year, construct an effigy, then light it on fire and watch it burn? Doesn't sound like you? It might, if you were Ecuadorean.

Traditions vary widely around the world, and the ways of one society often seem downright wacky to others. American culture and traditions, thanks to the hard work of Hollywood and other arms of the nation's media multiplex, have become well-known in most corners of the map. But that doesn't always mean people in other countries find some of these customs less bizarre than Americans consider theirs.

On the next 10 pages, we'll cover 10 traditions Americans take for granted, but that people in other countries often consider strange at best. 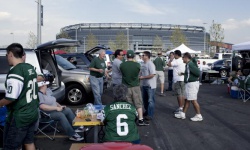 These New York Jets fans enjoyed a tailgate party in the parking lot of the New Meadowlands Stadium on Sept. 13, 2010. Getting to know your neighboring tailgaters is all part of the fun.
Per-Anders Pettersson/Getty Images

When Americans attend sporting events -- and football games in particular -- it's often not enough to simply show up and take their seats. They need to arrive hours in advance to properly prepare for the experience of seeing the game live and in person. Emblazoned in team colors, tailgaters will crowd the stadium's parking lot, grilling food, sipping cold adult beverages, playing lawn games and tossing around footballs.

Many tailgaters take their setup very seriously, and will even haul along stereos, TVs and satellite dishes to enhance the event. When it comes to how early fans arrive to start tailgating, the sky's the limit. Some are out there at the crack of dawn to begin the festivities -- or even the night before to claim a spot!

When it comes to the pigskin, the traditions don't stop in the parking lot, however. Check another strange American obsession related to football on the next page.

Television commercials are typically a trial to be borne, but when it comes to Super Bowl commercials, that's not even close to the case. The vast majority of Super Bowl spectators are Americans, and they eagerly await breaks in the big game to see which commercials wow them the most [source: Rushin]. In the days that follow, those ads are debated and hashed over, rated and discussed, with gusto and ad nauseam, maybe even more than the sometimes lackluster game.

Which commercials cost the most to make? Which ones were surprisingly cheap? How much were the commercial slots sold for? The potential questions are endless. As for answers, in 2011, one of the most popular commercials was a Doritos ad that cost only about $500 to make. Altogether, around 60 commercials aired throughout the game, with prices up to $3 million for 30-second slots [source: Horovitz]. At $100,000 a second, advertisers are happy to fuel this particular American tradition of advertisement scrutiny. 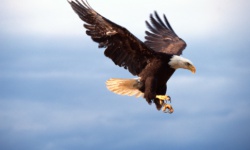 If this bald eagle is pursuing the American Dream, we'd wager he's pretty close to reaching it.
Jupiterimages/Photos.com/Thinkstock

Although the definition of the American Dream isn't set in stone and has been recalibrated over the years, there's little denying that Americans in general still teach their kids that this dream is one they, too, can enjoy. Whether or not that's a reality is another matter, but that's a question for different day.

At an emotional level, the American Dream evokes feelings of freedom to avenues of opportunity and equal access to paths of prosperity for anyone willing to work hard to achieve it. At a more practical level, many argue that achieving the American Dream has become equated with consumerism and ownership instead of the more purist notions at its core. Regardless of where the truth lies, it's still a national tradition to pass down the idea that the American Dream is achievable in each generation.

On the next page, we'll look at a less savory example of passing down values to the next generation.

Holding "Trials of the Century"

Americans love sensationalism, and their media is happy to give it to them, couched in familiar and impossibly exaggerated language. That's why, for example, every couple of years a new "Trial of the Century" takes place in America. All past "Trial of the Century" court cases are collectively forgotten, as the new one proves to be so much more distasteful, repugnant, abominable (insert appropriate adjective!) than the last.

Often these trials involve celebrities themselves -- this is true from Fatty Arbuckle to O.J. Simpson to former President Bill Clinton -- but oftentimes the trials make celebrities (however willing or unwilling) out of ordinary citizens. Casey Anthony's court case is a good example of a recent "Trial of the Century" that launched a regular person into the intense glare of the media spotlight. Her fame brought her mostly public shaming, but the American public also went out of their way to roast her on social media sites. Chances are, though, that a few years from now, the stage will just be set for the next "Trial of the Century" to commence. 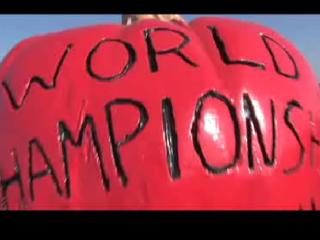 Each year, as corn stalks tower toward the sky and leaves turn yellow, orange and red, folks in the United States often flock to farms in order to attend fall festivals. Most of the goings on at these festivals are pretty tame if a little odd-sounding from an outside perspective. Families often participate in activities like going on hayrides, picking out pumpkins, walking through corn mazes, sampling cider, petting barnyard animals, that sort of thing.

But what really singles out some of these fall celebrations is the desire harbored by the visitors to witness pumpkins -- harmless lumpy gourds -- blasted into the air and launched great distances across acres of sprawling farmland. There are several ways this can be accomplished to satisfy a crowd, whether it's through the use of air cannons, catapults, trebuchets or machines using torsion and centrifugal force. Pretty much the only one who doesn't end up having a good time is the pumpkin.

For our next couple of strange tradition, we'll continue through the season.

Many cultures have strong historic traditions relating to dressing up around the time of Halloween and exchanging various forms of food, but few of these traditions involve children going door-to-door asking for candy with the words: "Trick or treat!" That strange practice is believed to be American in origin, but funny enough, perhaps the people who find this the practice most baffling are the pintsized rookies being paraded around the neighborhood. While at any other time of year their parents forbid them from talking to strangers, begging for candy and roaming the streets at night, all of a sudden they change their tune and support such shenanigans on one magical evening each fall.

But here's the catch: They only receive these precious goodies by parroting out the magic words "Trick or treat." And heaven forbid the giver of candy requests a "Trick" of these poor confused newbies. But after a few years, they catch on, and trick-or-treating becomes a tradition they couldn't imagine October without. 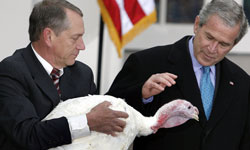 One pardon has become an annual tradition: the pardoning of the Thanksgiving turkey.
Skye Chalmers/Getty Images

Thanksgiving in general seems to mystify those not steeped in American traditions, but perhaps no part of that quirky turkey fest seems more bizarre than the annual ceremony during which modern presidents grant an official pardon to a live turkey presented to them by the National Turkey Federation (NTF). Interestingly, there's also been a great deal of confusion among Americans concerning the actual origins of this strange tradition.

Although the NTF has been gifting presidents with turkeys annually since 1947, the whole idea of "pardoning" them by sparing them from the stove didn't occur until years later, and even then, when it did occasionally happen, it certainly wasn't with anything as grandiose as a declaration of an official presidential pardon. The first bird to receive a formal stay of execution in the mode of an expressly stated "presidential pardon" wasn't delivered to the Rose Garden until 1989, when then-President George H. W. Bush started this act of official benevolence that's now become an annual American tradition.

Just hours after millions of unpardoned turkeys are devoured in the United States on Thanksgiving each year, armies of shoppers head out to get a start on their annual Christmas gift list. Black Friday sales traditionally launch this national weekend shopping bonanza, which wraps up on Cyber Monday, a more recently minted tradition that's grown in popularity with the rise of online shopping.

In 2010, the National Retail Federation conducted a survey, and estimated that more than 200 million shoppers went online and to stores around the nation during the weekend after Thanksgiving, with 106 million Americans planning to make purchases online come the following Monday [sources: Grannis, Grannis].

Most of those shopping on Black Friday arrive at a civilized time, but many diehards take the tradition a step further and start the day at a gruelingly early hour. In rare cases, riots or deadly stampedes have even broken out among shoppers slavering to get a certain deal or a particular product.

Competition among retailers is stiff on Cyber Monday as well, and many offer special promotions to try to lure browsing shoppers to their sites. In fact, a survey conducted in 2010 found that close to nine in 10 retailers ran some sort of deal that day. 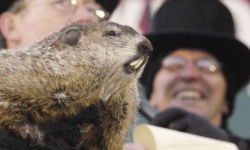 Leave it to Americans to make their warm weather travel plans based on the machinations of a reticent rodent. Each year, groundhogs around the country -- but most notably Punxsutawney Phil of Punxsutawney, Penn. -- are paraded out to predict how many more weeks will transpire before spring is on the way.

It's either six more weeks of winter, or an early spring, depending upon whether the little critter in question sees his shadow or not. This tradition has been going on since the 1800s, despite (ahem) modest advances in weather prediction since that time. And speaking of measuring stuff by strange means, we've got one last weird American tradition for you on the last page.

Inches, Teaspoons and a Ton of Bricks

It's perfectly acceptable to use the metric system in the United States -- Congress originally authorized it in 1866 and has repeated those sentiments in the years since -- but tradition tells a whole other tale. Although the government now requires metric use in some public sectors and strongly encourages it in many private industries, the American public never really took to the system and largely dismissed it, making the United States the only industrialized nation where that's the case.

In an effort to move the matter along, Congress even passed a Metric Conversion Act of 1975 and set up a U.S. Metric Board to take care of all the planning for the desired transition, but they apparently didn't empower the board with enough authority, and the American people essentially said, "meh" to adopting metric and continued on with their miles, pounds, ounces and all the rest. Similarly lackluster efforts since then have done little to get Americans to change their ways.

For more about culture and country's particular codes of conduct, check out the links on the next page. 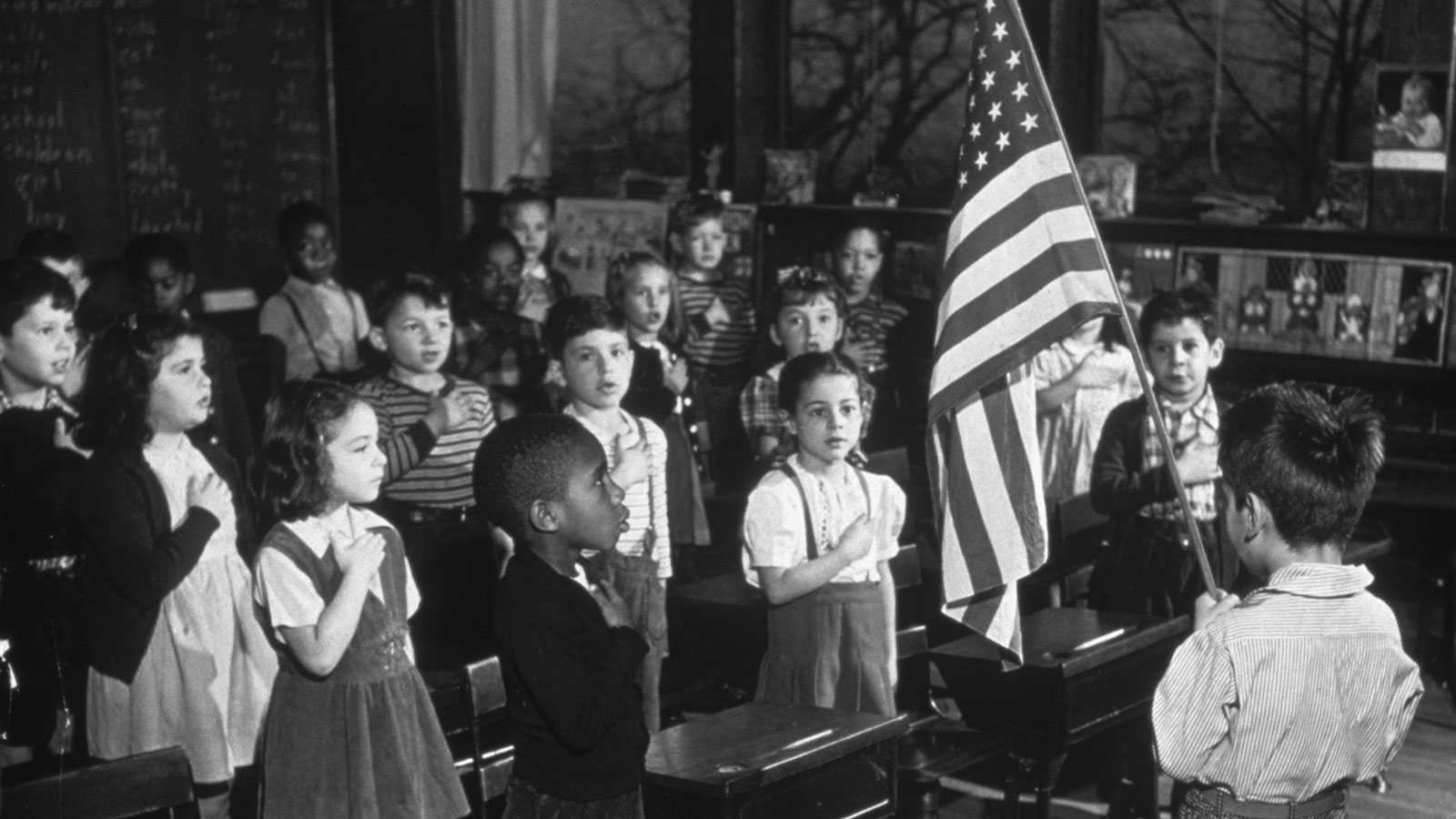 The Pledge of Allegiance started as just part of a marketing campaign to sell flags. But along the way, it became something much much bigger.