What to Give: Guide to Multicultural Holiday Celebrations 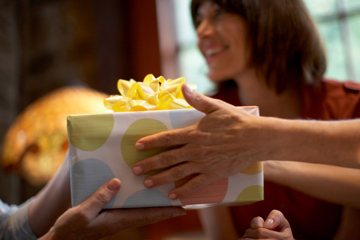 Remember that no matter the culture, the holiday spirit is about people feeling close to one another.
Kim Carson

Christmas, Kwanzaa and Hanukkah celebrations may appear worlds apart, but when you compare them, these seemingly different holidays all bear a common theme. Simply put, they're meant to bring people together. If you find yourself invited to a holiday party this year, taking a little extra time to familiarize yourself with the stories and traditions of different holidays will let your host know you respect their beliefs (and will probably get you invited back next year).

Putting a little extra effort into finding a gift that observes their religious beliefs will shine through the clutter and commercialization of the holidays. Remember that simply being a gracious and thoughtful guest is enough. You've been invited to their party for a reason. They want to share the holiday spirit with you, and that spirit, no matter what the holiday or culture, is about people feeling close to one another.

Although its roots date back centuries, Kwanzaa is the youngest of all the year-end holidays. In 1966, political scientist and ethicist Dr. Maulana Karenga created Kwanzaa as a weeklong celebration to honor African-American cultural heritage. Each of the seven nights of Kwanzaa, held from Dec. 26 to Jan. 1, observes one of the Seven Principles (or Nguzo Saba) rooted in African cultures and that collectively constitute a full life and a tight community. These principles are umoja (unity), kujichagulia (self-determination), ujima (collective work), ujamma (cooperative economics), nia (purpose), kuumba (creativity) and imani (faith).

While each night of Kwanzaa is centered on a different principle, the celebrations share the common theme of honoring ancestors, and reinforcing family, community and introspection. Kwanzaa is a time of not only solemnity, but also celebration and fun. If you're invited to a Kwanzaa party, prepare for both.

Kwanzaa etiquette is largely based around respecting the spirit of the celebration. Symbols, like ceremonial mats and ears of corn arranged to represent your host's children still living at home, intertwine with rich African rituals, such as the sharing of libations like ginger beer from a kikombe cha umoja (a communal chalice). Don't be surprised when a bit is poured on the ground -- it's done to share with ancestors. During the evening ritual, there will be a welcome ceremony that includes the reading of the day's principle, followed by a lighting of the mishumaa saba (the seven red, black and green candles) by your host's youngest child, ancestral stories and affirmation of the principles that brought all of you together.

You can expect delicious food like seafood gumbo, black-eyed peas, cornbread and plantains for the celebratory spread, with music, dancing and poetry. Ask your host if you can bring any food; Kwanzaa is a time of community, and the sharing of food and cooking duties is an ancient communal concept.

The principles of Kwanzaa are intentionally contrary to commercialization. However, according to Jessica B. Harris, author of A Kwanzaa Keepsake, as a guest at a Kwanzaa party, you shouldn't feel bashful about bringing a zawadi (gift). Parents give their children these presents to their children during Kwanzaa, but you can bring them as well. A good zawadi is intended to support the principles of Kwanza, so bringing toys or games that foster creativity or community is a good move. Any gift that contributes to personal or communal growth will be appreciated.

Hanukkah is perhaps the most ancient year-end holiday. It is the Jewish festival of lights, commemorating a Jewish victory in 164 B.C. In ancient Syria, Greeks, Jews and Arabs lived tensely together. Jews revolted against Syrian rule and Greek intimidation. At the center of the region was a temple, and control of it provided both religious significance and symbolic power. During the Jewish rebellion, led by Mattathias and then his son Judah Maccabee, the Jews captured the temple at Jerusalem.

The Greeks had erected a shrine to their god, Zeus, in the temple, a sacrilegious act that led to the Jewish rebellion. To purify and consecrate it once more, the Jews sought to burn ritual oil. In the years-long war, their oil had been destroyed. Only one vial was left, enough to last one night. Amazingly, the oil burned for eight nights, giving the Jews enough time to make more oil and signifying God’s blessing on them.

Hanukkah commemorates the oil’s miraculous burning, and the menorah, the candelabra that holds nine candles, plays a central role in the eight-night-long celebration. A shamash (servant) candle held in the middle of the menorah is used to light the first candle, placed in the far right slot of the menorah. Blessings and thanks are uttered in prayer, and on each successive night a new candle is placed in the menorah (from right to left) and lit with the shamash candle (from left to right). Religiously, Hanukkah isn’t of great importance to the Jews. Like Kwanzaa, it’s a time to celebrate community and give thanks.

An invitation to a Hanukkah party means you can expect good food and warm feelings. If you’d like to bring a gift for your hosts, jelly-filled sugar doughnuts are a good idea. If you prepare these doughnuts, called sufganiot, be sure to use a kosher recipe, using kosher ingredients (Jewish law includes some dietary restrictions). It’s a good idea that any food you bring should be certified kosher, out of respect to Jewish observances. Look for the kosher symbol on food items or ingredients. Latkes, a type of fried potato pancakes, are also a traditional food you may want to bring as a gift.

You may also consider bringing gifts for your host’s children. While any token of gratitude for your invitation will be gladly accepted, you may want to observe tradition with Jewish-themed gifts, like a dreidel or gelt. A dreidel is a spinning top with ancient origins that taught Jewish youth the Torah under the nose of Greeks rule. The gift of gelt (money) shouldn't break your account; instead, you can pick up chocolate coins as a present, a Jewish tradition.

Along with Easter, Christmas is one of the two holiest days in the Christian faith. The holiday, held on Dec. 25, marks the birth of Jesus Christ. According to the biblical story, Christ was born in a manger (a stable) beside an inn in Bethlehem, near Jerusalem. The birth was marked by a brilliant star (the Star of Bethlehem or the Christmas Star), which led three magi (wise men) to the stable with gifts of gold and the incenses frankincense and myrrh. Shepherds in a nearby field were visited by an angel, who announced the son of God had been born.

The holiday has become widely celebrated in a secular way in Western countries, including by non-Christians, with additions like Santa Claus and his reindeer, Christmas trees, and presents. Many of these additions bear some religious significance -- Santa Claus is actually based on a Turkish Christian saint named Nicholas who lived in the third century, and Christian reformist Martin Luther is credited with creating the tradition of decorating a tree for Christmas.

In the Christian faith, the holiday is meant to share good tidings and fellowship, so don't be surprised if you're invited to a Christmas party. There, you'll likely find a nativity scene recreating the manger at the time of Christ's birth. Secular adornments like garlands made of evergreen boughs may also adorn the home, and candles may be lit to reflect the stillness and comfort the night symbolizes.

While any small token of gratitude will make an appropriate gift for your hosts, you can also show respect for their religious beliefs. A Christian-themed carol book is a good present, and may get the party guests singing. If your host has a Christmas tree, a religious ornament for it is another great gift. And Christian-themed cookie cutters will get your hosts baking, while helping pass along their religious beliefs to their children.

Food is also always welcome. Gingerbread houses don't have any religious significance, but are an innocuous and well-regarded gift. The same goes for eggnog, although you may want to pass on bringing any alcohol to add to it, as your host may abstain out of religious observation.