Why Are New Year's Resolutions So Easy to Break?

Plan to Make Your New Year's Resolution a Success 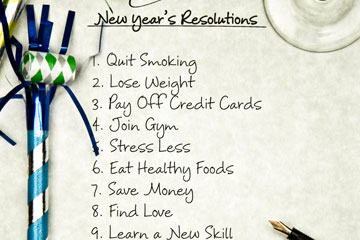 If you find yourself making the same resolutions year after year but rarely achieving them, you’re not alone.
© Catherine Lane/Getty Images

In the end, whether or not we keep our New Year's resolutions comes down to whether or not we give ourselves a resolution we can stick to. Resolutions that are small in scope with specific and realistic goals help, especially for those of us who make goals like "get in shape" (the number one resolution for 2013) without then planning how we'll go about achieving the goal [source: FranklinCovey].

Not only are we not specific or realistic with ourselves, we don't give ourselves deadlines, and we don't track our progress. Yes, promising yourself this is the year you'll lose weight is a great goal -- and a popular one [source: Time]. But how will you do it? More than 30 percent of us who make this New Year's resolution break it [source: FC Organizational Products]. If you want to stack the odds that you will lose weight, define what your specific weight loss goals are and give yourself a deadline within which to meet those goals. Make the goal reasonable enough that you're not intimidated by it, and the deadline realistic: Resolve to lose 10 pounds by Memorial Day, and keep yourself honest with daily progress reports.

If you want to get in shape, make it your resolution to, for instance, always take the stairs (it's a good start). Keep a journal of your progress -- the good and the bad (including those days when you took the elevator because you were running late) -- to help keep yourself focused and on task.

Progress reports are a good way to keep yourself motivated and moving in the right direction toward your goal; without them -- and sometimes despite them -- we can become discouraged. And when we're discouraged we tend to give up on the goal. But don't! Researchers have found that a few off-days from time to time doesn't have much, if any, effect on your overall success [source: Burkeman]. Instead of giving up on your goal when you have a setback, take things one day at a time.

Researchers are also examining a phenomenon called decision fatigue that plays a part in how likely we are to keep resolutions [source: Tierney]. The more decisions, even small ones, that you have to make in a day (including deciding to go for a walk or run, selecting healthy foods, and putting away cash for a rainy day), the more depleted your willpower and self-control will be as the day wears on. So think about how you can incorporate small steps to your goal in your daily life so they'll be automatic and require little or no decision effort. Making tough decisions related to your resolution early in the day (for example, get your workout in early or pay bills and handle finances before you leave for work) could help ensure a successful outcome.

The majority of Americans who made New Year's resolutions in 2012 committed to losing weight. Getting more exercise followed as the second most popular resolution, with quitting smoking, saving more money and being a better person all tied for third [source: LeTrent].

Author's note: Why are New Year's resolutions so easy to break?

I fall into the category of people who don't make New Year's resolutions. I know you might be wondering what's wrong with me. Why or why not, who's to say, but I can't remember a time when I considered New Year's resolutions to be for me. But just because I don't make it a habit of pledging to change my habits at the beginning of each year, it doesn't mean I'm not interested in self improvement -- and in regard to that, isn't it refreshing to learn that it's not realistic to expect you can break a habit in less than a month?