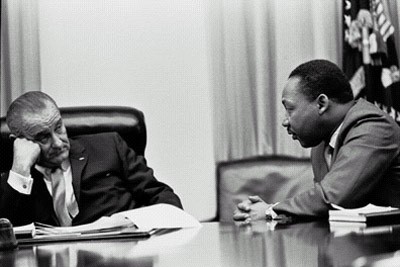 When an individual is denied any of these civil rights based on his or her gender, race, religious beliefs or even age, it is considered discrimination. The government has created several statutes to counteract discriminatory practices. For example, Section 601 of the Civil Rights Act of 1964, 78 Stat. 252, 42 U.S.C. 2000d, states:

No person in the United States shall, on the ground of race, color, or national origin, be excluded from participation in, be denied the benefits of, or be subjected to discrimination under any program or activity receiving Federal financial assistance.

This particular law affects many areas of life, but to give you a concrete example: This law ensures that students, no matter their gender, race, or religious creed, wanting to attend a public university (an institution that receives Federal financial assistance) are given fair consideration for admittance during the application process.

An Eddy of Change The 1950s and 1960s are considered the decades of the civil rights movement. It was during these decades that Dr. Martin Luther King, Jr. dedicated himself completely to the civil rights movement, human welfare, world peace and the struggle against poverty. In doing so, he faced countless arrests and unwarranted acts of violence, including bombs, a stoning and a stabbing.

The latter part of the 1960s saw a shift in King's focus, from civil rights to socioeconomic issues and peace. Though originally conceived in 1962, it was during the late 60s that "Operation Breadbasket" truly took flight, becoming a nationwide program. The goal of Operation Breadbasket, much like the Poor People's Campaign mentioned earlier, was improved economic conditions. In 1966, King asked his aide Jesse Jackson to head a Chicago division of Operation Breadbasket. Jackson soon found success when he garnered cooperation with various national companies that agreed to employ black workers and sell black-owned product lines.

King's philosophy on peace and his open opposition to the Vietnam War is clearly evident in this excerpt from his speech "Remaining Awake Through a Great Revolution," given March 31, 1968, at the National Cathedral just days before his death:

On July 2nd, King stood nearby as President Johnson signed the Civil Rights Act of 1964. Dr. King and scores of civil rights activists and supporters heard an answer to their collective call for justice in the new Act:

To enforce the constitutional right to vote, to confer jurisdiction upon the district courts of the United States to provide injunctive relief against discrimination in public accommodations, to authorize the Attorney General to institute suits to protect constitutional rights in public facilities and public education, to extend the Commission on Civil Rights, to prevent discrimination in federally assisted programs, to establish a Commission on Equal Employment Opportunity, and for other purposes. Be it enacted by the Senate and House of Representatives of the United States of America in Congress assembled, That this Act may be cited as the 'Civil Rights Act of 1964'."

Some of the precipitating events of the Civil Rights Act of 1964 are:

In 1960, Dr. King resigned from his post as pastor of the Dexter Avenue Baptist Church and moved to Atlanta to devote himself fully to the civil rights movement. At this time, King had already been working for the Southern Christian Leadership Conference (SCLC) for three years. The SCLC was founded after the success of the Montgomery Improvement Association (MIA) in desegregating the Montgomery bus system.

In December of 1955, Rosa Parks, a 43-year-old black seamstress and secretary for the local NAACP chapter, refused to vacate her seat on a bus so that a white man could sit down. Subsequently, she was arrested. Responding to Parks' arrest, several community leaders, including Martin Luther King, Jr., organized the Montgomery Bus Boycott. The boycott continued, and in December of 1956, a little over one year after the boycott started, the United States Supreme Court declared Alabama's segregation laws unconstitutional. The Montgomery buses were desegregated. Dr. King's leadership of the boycott garnered him national attention.

Prior to his work with the MIA, King was finishing up his schooling. King attended Morehouse College in Atlanta, and then continued his studies at Crozer Theological Seminary in Pennsylvania. While working toward his Ph.D. in systematic theology at Boston University (which he received in 1955), King became intrigued by Mohandes (Mahatma) Gandhi's nonviolent strategy for social change.

Eventually, like many other successful humanitarians (such as Nelson Mandela and Kwame Nkrumah), it was Gandhi's philosophy that inspired King's participation in the civil rights movement. In fact, in 1959, upon returning from a month-long visit to India, King compared the race problems in the United States to the caste system in India.