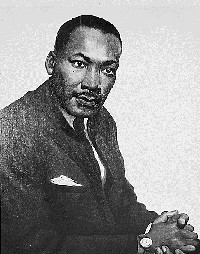 Before we embark on our journey back through time, let's consider what King was dreaming about in his speech:

... I say to you today, my friends, so even though we face the difficulties of today and tomorrow, I still have a dream. It is a dream deeply rooted in the American dream. I have a dream that one day this nation will rise up and live out the true meaning of its creed: 'We hold these truths to be self-evident, that all men are created equal.' ... I have a dream that my four little children will one day live in a nation where they will not be judged by the color of their skin but by the content of their character ...

While many people commonly associate Dr. King solely with the civil rights movement, his platform was broader than that. His was not a struggle for black Americans, but for all Americans. His was not a call of action against racism alone. King was also disturbed by poverty, a societal disease that affects people of every racial, ethnic and religious background. His concern for human welfare and peace did not stop along the borders of America, but instead spread to countries around the world.

One who heartily opposed classism and colonialism, King admired the work of other social and political figures like Mahatma Gandhi and Kwame Nkrumah. In a sermon delivered at Dexter Avenue Baptist Church on April 7, 1957, in Montgomery, Alabama, Dr. King had this to say:

Hundreds, if not thousands, of people dedicated their personal and professional resources and time to the cause. But when the topic of civil rights is at hand, none are quite as recognizable as Dr. King. For many of us, King was and continues to be the face and voice of the civil rights movement. Even those who have little knowledge of the actual events still know his name: Countless schools, libraries and roadways bear the name of Martin Luther King, Jr. Let's take a closer look at why that is.

A few of the precipitating events of the modern civil rights movement are: