Browse the article How Hanukkah Works 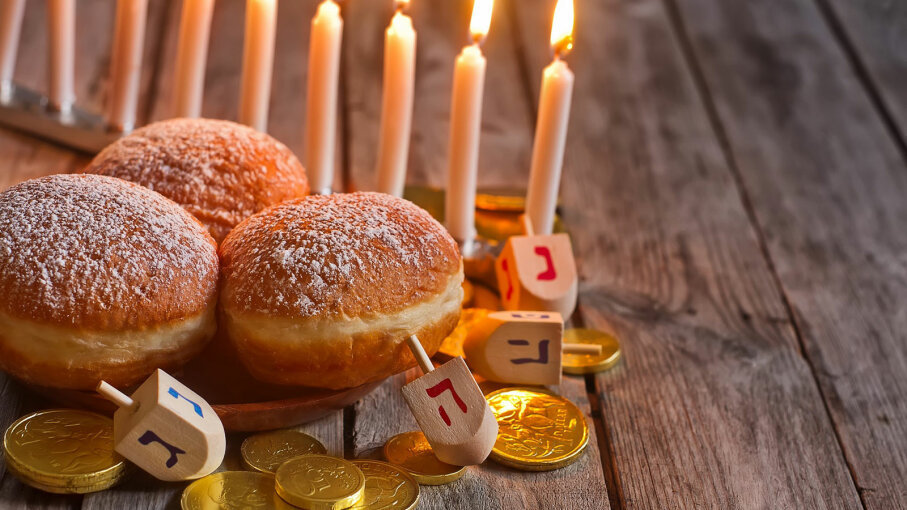 The eight-night celebration of Hanukkah includes symbols like the hanukkiah, doughnuts and dreidels. Karaidel/iStock/Thinkstock

Every year, usually in mid- to late-December on the Western calendar, Kislev 25 on the Hebrew calendar, Jews around the world celebrate the holiday of Hanukkah. Also known as the Festival of Lights, the holiday remembers one particular instance of triumph over religious persecution, when the Jews were able to escape oppression at the hands of Antiochus, a Syrian king.

To people who aren't Jewish, Hanukkah is often the most well-known of the Jewish holidays. Hanukkah does not have as much religious importance as the Jewish High Holidays -- Rosh Hashanah and Yom Kippur -- but it is one of the most entertaining holidays on the Jewish calendar for adults and children alike. In this article, you'll learn the basics of the Hanukkah celebration.

Hanukkah is an eight-night celebration. The Hanukkah celebration includes lighting the candles of the Hanukiyah (in English-speaking countries this is often called a Menorah, which is the Hebrew word for a candelabra) on each day of the holiday, playing with the dreidel, eating latkes and exchanging Hanukkah gelt.

Like another famous winter-time holiday, Christmas, Hanukkah is about history. The celebration of Hanukkah is a commemoration of an event that happened more than 2,000 years ago.

In 167 B.C., the Syrian king Antiochus IV began to outlaw Jewish religious practices and forced Jews to adopt Greek rituals. His men took control of the Jews' Holy Temple in Jerusalem, looted it and erected an idol of a Greek god there. One Jewish family, the Hasmoneans (led by Mattityahu and his five sons), decided to take a stand against the persecution. The Greek forces arrived in the town of Modiin, near Jerusalem. It was here that after refusing to violate his own religion by praying to the Greek god Zeus, Mattityahu attacked the Greek soldiers.

This action began the Jewish rebellion. Mattityahu and his sons became known as the Maccabees, which means "men who are as strong as hammers" in Hebrew. The small army, led by Mattityahu's most famous son, Judah Maccabee, fought sizeable Greek forces. In 165 B.C., the Maccabees were triumphant. On the 25th of the Hebrew month Kislev, the Maccabees reclaimed the Holy Temple.

They decided to rededicate the temple -- the word "Hanukkah" means dedication. The Jewish army was unable to find enough oil to light the Menorah, or candle holder, to be used in the service. The Maccabees found only one bottle of oil, enough for only a single night. Miraculously, the oil lasted eight nights, giving the Jews time to produce more oil.

The holiday of Hanukkah commemorates this miracle. By lighting candles for eight nights, beginning every year on the 25th of Kislev (usually in December on the Western calendar, but not always), Jews celebrate the triumph of the Maccabees, the rededication of the Holy Temple and the miracle of the oil lasting for eight days.

The holiday of Hanukkah is spelled several different ways in English, including "Hanukah," "Hanukkah," "Chanukkah," and "Chanukah." This is what the word looks like in Hebrew: 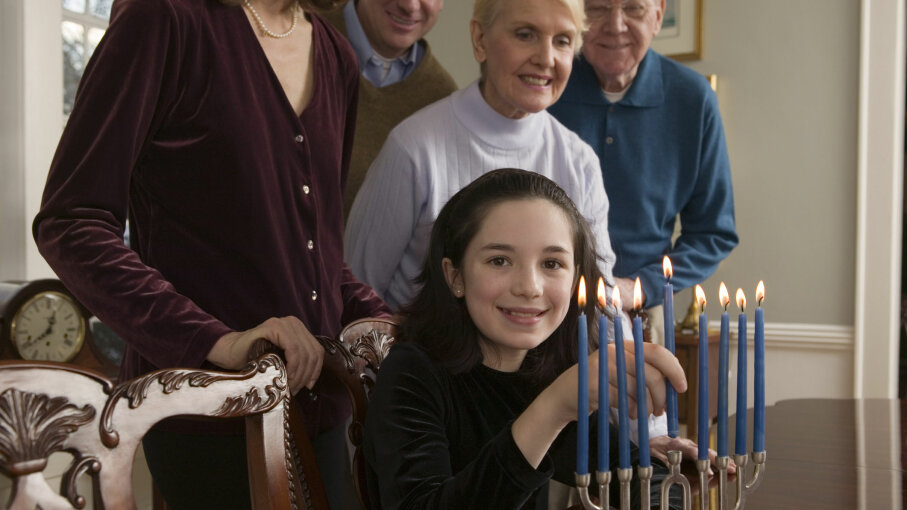 Shamash is the name of the candle that is used to light all the other candles in the Menorah. Comstock Images/Getty Images

There are a variety of traditions and practices surrounding the celebration of Hanukkah.

The most important, and most recognized, Hanukkah tradition is the lighting of the candelabra, known as the Hanukiyah (or the Menorah). The Hanukiyah holds nine candles, eight representing the eight nights of the holiday plus the Shamash -- this candle is used to light the other candles. The first candle is lit on Erev Hanukkah, the night before the holiday starts.

One inserts the candles into the Hanukiyah from right to left, one candle for each day of the Hanukkah miracle (for instance, on the second day of Hanukkah, there are two regular candles and a Shamash candle in the Hanukiyah). Blessings are said while someone lights the candles from left to right. According to tradition, the left-most candle represents the most recent day of the miracle, and one lights this candle first because he is most thankful that the oil lasted yet another day. As each day passes, the Hanukiyah becomes brighter and brighter.

These are the blessings for the lighting of the Hanukiyah: 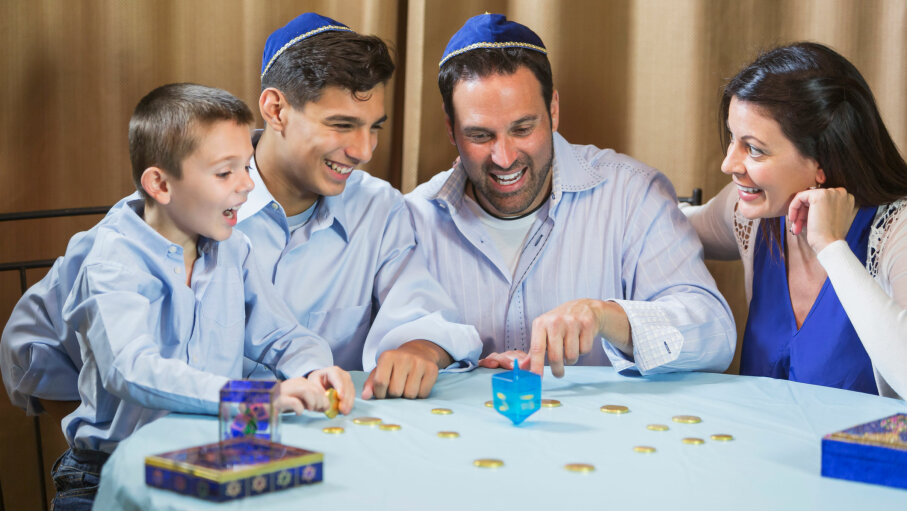 The dreidel is a four-sided spinning top with a Hebrew letter on each side. The dreidel game was played during time of Antiochus, before the Jewish revolt. Because Jews could be killed for practicing their religion, when they gathered to study the Torah, or holy scripture, they would have a dreidel handy. If they were discovered by Greek soldiers, they could pretend to be playing with it.

The game is usually played with each player receiving a number of coins or candy. Before spinning the dreidel, each player puts money in the pot, or kupah. On each side of the dreidel is a Hebrew letter: nun, gimmel, hey or shin. Each player spins the dreidel and sees what letter is facing up when it falls. Each letter represents a different outcome, from winning nothing to taking the whole kupah. For more information, check out Holidays.net: Playing the Dreidel. 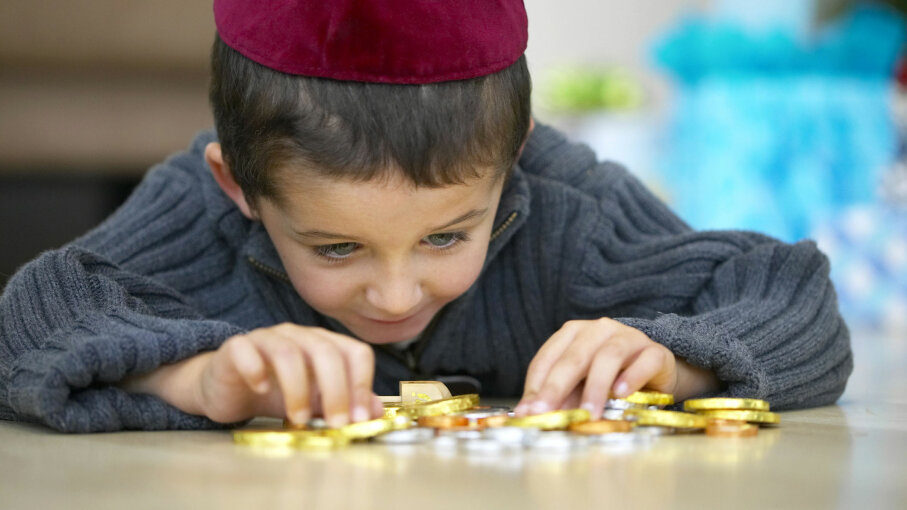 Christmas may have influenced the Jewish tradition of giving gelt, encouraging the exchange of gifts during the eight days of Hanukkah. PNC/Getty Images

The word gelt means "money" in Yiddish. On Hanukkah, there is a tradition of giving real or chocolate coins as presents to children. Most likely because Hanukkah falls near Christmas, giving gelt has evolved into giving and receiving other presents on each of the eight nights of Hanukkah. 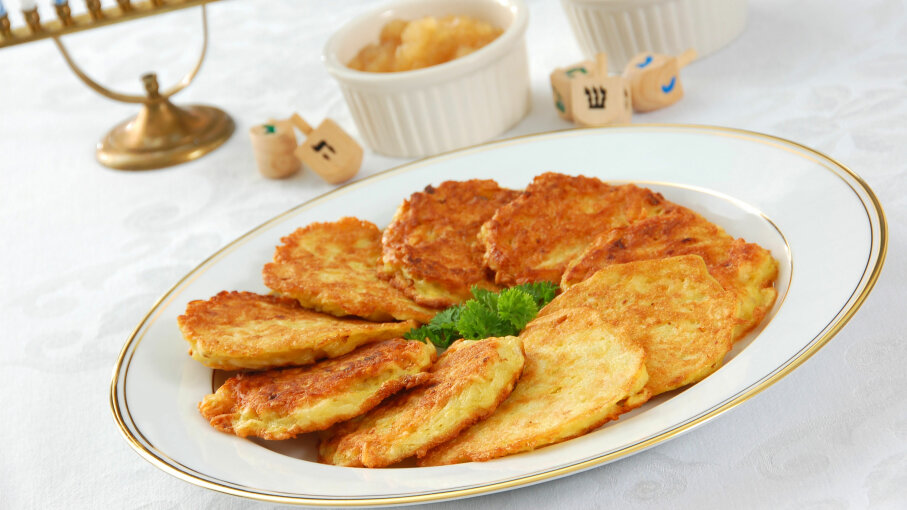 Latkes, and other fried Hanukkah foods, serve as a reminder of the miracle of the oil that lasted for eight nights. sbossert/Getty Images

Commemorating the miracle of the oil that lasted for eight nights, Hanukkah foods are usually fried in oil. Latkes are the most notable example of these fried foods. Latkes are potato pancakes found in many Jewish homes during Hanukkah. They are made by frying small pancakes of grated potatoes held together by eggs and/or milk. They are usually eaten with apple sauce or sour cream.

In Israel, the custom is to serve sufganiyot, jelly doughnuts fried in oil, on Hanukkah. There, you can buy them on almost any street corner. They are very similar to the jelly doughnuts we know in America. They are filled with jam and covered with powdered sugar. Sufganiyot are a reminder of the cakes hurriedly prepared for the Maccabees as they went into battle.

In our day and age, Hanukkah has taken on some additional meaning because it is so near to Christmas. Nowadays, people often shop for Hanukkah gifts like they do for Christmas gifts, and the Hanukiyah has become a recognized symbol of the holiday season.

The Festival of Lights is a time for Jewish families to rejoice, play games, give gifts and light the candles. It commemorates a triumph over religious persecution and the importance of a 2,000-year-old miracle.

For more information on Chanukah, Judaism in general and other holidays, check out the links on the next page.