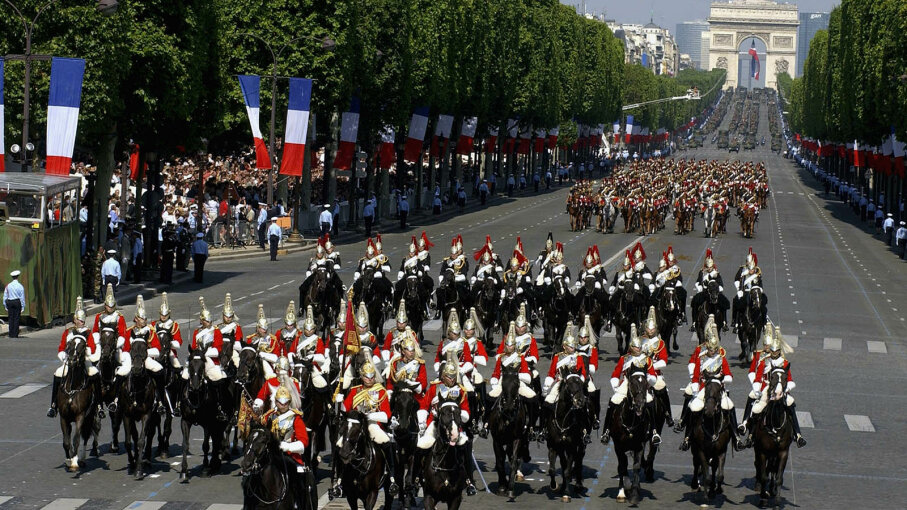 The Household Cavalry Mounted Regiment ride down the Champs Elysees at the start of the annual Bastille Day Parade in Paris, France. Mike Harvey/British Army via Getty Images

Within the English-speaking world, the French national holiday commemorating the anniversary of the Storming of the Bastille is commonly referred to as "Bastille Day." But not in France. There it's simply le Quatorze Juillet.

Because the holiday is celebrated during summer — and marked by fireworks — many non-French often mistake it for France's version of an independence day. While its history is similarly steeped in revolution, this French national holiday is related to the birth of the French Republic, not its achievement of independence. And it's also not the day Louis XVI was guillotined, or even part of the story of "Les Misérables," though it did start with a prison break, sort of.

What Is Bastille Day?

When a group of Parisians stormed the Bastille prison on the east side of Paris on July 14, 1789, they wanted weapons and ammunition. Some prisoners were freed, but the actions of the protestors had much farther-reaching consequences. The event took place within an already contentious political period when the Third Estate — non-nobles and non-clergy — sought equal representation and expressed anger at the burden of taxation. The Bastille was a symbol of the unchecked powers of the French monarchy.

While the bourgeoisie (middle class) made political moves, unrest grew in the capital among the working class, leading to the events of July 14, eventually culminating in the toppling of the French monarchy and the beheading of Louis XVI in 1793.

"The storming of the Bastille prison was considered a demonstration against political tyranny," explains Shanita Miller, interim executive director, Alliance Française Atlanta. "This was one of the most defining moments of the French Revolution."

Although not as politically important as other revolutionary happenings in France (like the formation of the National Assembly and the adoption of the Declaration of the Rights of Man and the Citizen on August 26 of the same year) the Storming of the Bastille came to symbolize the French Revolution. And despite the many changes the French government has gone through since then — it's currently on its Fifth Republic — July 14 was named as the country's national holiday.

On July 14, 1789, Parisians stormed the Bastille. The Bastille symbolized the much-hated Bourbon monarchy and Bastille Day is now celebrated as the beginning of the French Revolution.
Hulton Archive/Getty Images

But the Storming of the Bastille in 1789 is not the only thing honored by the French on July 14. They also celebrate another event that took place exactly one year later: la Fête de la Federation.

Just 12 months after the Storming of the Bastille, France was in a state of relative peace. Louis XVI continued to reign, although with fewer powers, and the aristocracy had lost all privileges. Changes also had been made in the way the clergy operated.

According to the BBC, to mark this "optimistic phase" of the revolution, authorities hosted la Fête de la Federation on the one-year anniversary of the Storming of the Bastille, which included a festival in Paris' Champs de Mars. Queen Marie Antoinette even displayed her baby son and heir to the throne to the crowd.

A few republics, one emperor and a restoration later, French leaders were interested in a way to honor the beginning of republicanism in France, and they looked back to July 14. Although whether it was the initial Bastille event or la Fête de la Federation was never explicitly stated. Nevertheless, in 1880, the official national holiday was declared.

"July 14 commemorates so many important moments in shaping a unified France that it's understandable why the French refer to this day by its date instead of Bastille Day," Miller says. In fact, calendars in France are printed with "Fête nationale" on the date of July 14.

"'Bastille Day' is an English expression; I have never heard it used in French," says Anna Cumbie, a teacher who lives in Toulouse, France. "The word 'Bastille' now either refers to the neighborhood in Paris where the Bastille once stood — the area surrounding Place de la Bastille and its metro stop — or to the historical event of the storming of the Bastille."

Whatever you choose to call it, "the French national holiday" is the "one event not to miss in Paris," according to the Paris Convention and Visitors Bureau website. In fact, there are actually two days of celebration with entertainment culminating in a 30-minute fireworks display set off from the Eiffel Tower and the gardens of Trocadéro. Parisians and visitors can watch this show from many locations, like the city's parks, monuments or restaurants, and even from cruises on the Seine. Other French cities host similar celebrations.

"I typically go to see fireworks," Cumbie says. "All big cities have a fireworks display and often an event. Toulouse usually organizes an outdoor concert and then fireworks over the Garonne River. During the day, a lot of people watch the military parade on TV. One of the big celebrations that's famous throughout the country and often shown on TV is the dramatic fireworks display at the La Cité Médiévale de Carcassonne."

If you can't make it to Paris or any other French city to take part in the annual celebrations, there are plenty of options for Francophiles around the world.

"I always suggest looking up your closest Alliance Française, Institut Français or contacting local French restaurants," Miller says. "These three groups will always find a way to celebrate France's national day." The Alliance Française in Atlanta, for instance, has been hosting Bastille Day celebrations for more than 30 years.

Just remember not to confuse the meaning of le Quatorze Juillet with that of America's Fourth of July or other national holidays; it's not a celebration of independence.

"It's different from the Fourth of July in that it's not necessarily associated with being patriotic in the way Americans tend to be," Cumbie says."Our celebrations don't usually include flying French flags or wearing them on our shirts or singing the national anthem."

That's a relief, because singing "The Star-Spangled Banner" is challenge enough.

Fireworks light up the sky over the Eiffel Tower as part of Bastille Day celebrations on July 14, 2016 in Paris, France.
Thierry Chesnot/Getty Images
Now That's Interesting
The Storming of the Bastille occurred in 1789, sparking the French Revolution. But it took three more years for the monarchy to be completely overthrown and totally abolished. It wasn't until 1793 that Louis XVI and Marie Antoinette were sent to the guillotine for treason.