by Laurie L. Dove
Prev NEXT
2

Steve Martin and John Candy sit in a destroyed car in a scene from the film 'Planes, Trains & Automobiles,' 1987. Paramount/Getty Images

This 1987 film follows Neal Page (Steve Martin) and Del Griffith (John Candy) on a journey of Odysseus-like proportions. The impromptu duo's nearly failed attempt to return from a business trip in time for Thanksgiving dinner leads to a likeable stint of self-discovery. Soon, each man realizes he isn't quite the easy-going-peach-of-a-guy he assumed he was, and we figure out that what started as a comedy offers a few redemptive lessons, too, like caring for a nearly total stranger. It's enough to make us feel a little smarmy and wistful -- which is just the right mood for a family Thanksgiving. 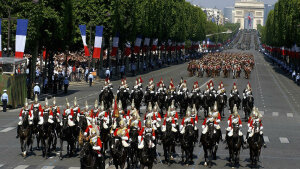