Browse the article Why Do We Trick or Treat? 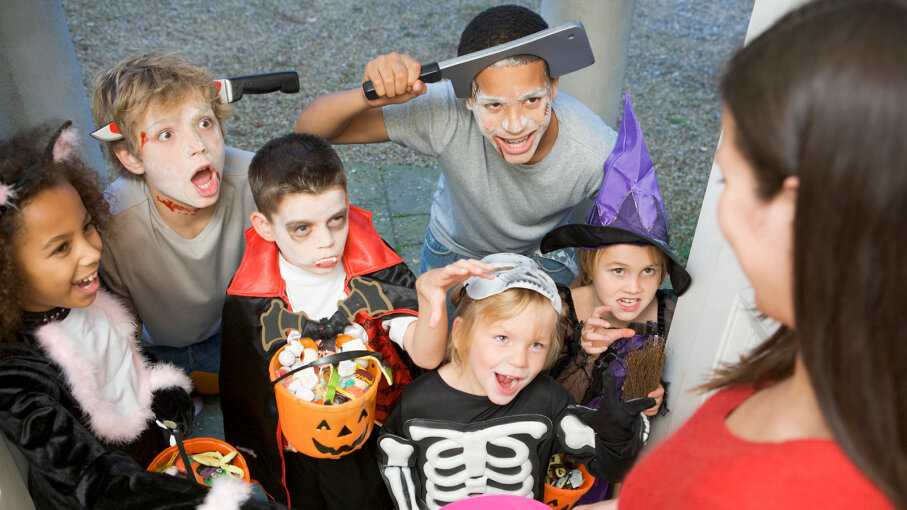 To grasp the rhyme and reason of why children don ridiculous costumes and bang down doors demanding candy once a year, we must rewind the clock a couple of millennia and visit the ancient Celtic clans of Britain. The Celts celebrated the end of fall harvest and the beginning of their new year with the pagan festival Samhain (pronounced "sow-en"), which fell on Nov. 1. On the night before the celebration commenced, the dead were thought to travel back home for an annual visit. To frighten away any accompanying evil spirits, the Celts lit fires around the countryside, and some dressed in disguise when venturing into the eerie outdoors to avoid being recognized by unfriendly ghosts. Traces of these primitive rituals persisted as the centuries wore on, and even as the Catholic Church sought to abolish the pagan pastime.

In the eighth century, the church began commemorating the feast of All Saints on Nov. 1, possibly as a replacement for Samhain. The preceding day became known as All Hallow's Eve, which was further shortened to Halloween.

As the secular Samain and sacred All Hallow's intertwined, the dead spirits that characterized the holiday assumed more negative connotations (hence the modern Halloween icons of witches, ghosts and ghouls). To appease those evil spirits, people left food and drink outside to protect their homes from spiritual retaliation. Gradually, savvy celebrants took advantage of the tasty offerings by dressing up as the dead and trekking from door to door to ask for provisions in exchange for protection from wicked spirits. According to the American Folklife Center, the practice, which became known as mumming, served as a precedent for trick-or-treating.

In England, the poor would organize soul parades to beg for alms on All Hallow's Eve in exchange for prayers to deliver dead souls from purgatory to heaven. As the years wore on, children took over the tradition, calling themselves "soulers." Bands of them would knock on doors and sing songs in return for sweet, currant-topped breads called soul-cakes. The trick-or-treating custom crossed the Atlantic with the influx of immigrants from England and Ireland that moved to the United States in the mid-19th century.

Trick-or-treating wasn't widely popular in the United States until around 1940, writes Nicholas Roger, author of "Halloween: From Pagan Ritual to Party Night." Before then, the mischievous holiday had spiraled into an adolescent free-for-all, marked by rampant vandalism and excessive tomfoolery. As communities sought to provide alternative Halloween activities for the local youth at the turn of the century, trick-or-treating as we know it today caught on. Retailers also noticed the trend and began offering readymade costumes, and candy manufacturers seized on the golden opportunity.

Sensational reports of razors in candy apples, treats laced with laxatives and other horror stories dealt a blow to trick-or-treating in the 1970s and early 1980s. Nevertheless, the tradition is still alive and well today -- just ask the National Confectioners Association. The pumpkin-hued holiday takes the cake for the highest candy sales, with Americans shelling out more than $2.2 billion on sweets in 2008. But in spite of Halloween's commercial appeal, those ancient Celtic rites echo on as hordes of costumed children trick-or-treat every year in the crisp October air.