by Dave Roos Oct 26, 2016
How is this Netherworld creature going to scare you? Netherworld

This fall, at hundreds of haunted houses across the United States, people are paying good money to have the snot scared out of them. Haunted houses deliver a primal thrill of staring down your worst fears — clowns, zombies, darkness and death — and walking away unscathed.

"A good haunted attraction rides the razor's edge between Halloween on one side and horror on the other," says Ben Armstrong, co-creator of Netherworld, an award-winning Halloween attraction in Georgia. "Too far into 'Halloween,' it becomes too kiddie ... Too far into horror  becomes too morbid, too nasty."

Today's best haunts not only boast Hollywood-quality animatronic monsters and elaborate costumes, but even staff sociologists to exploit our deepest phobias to monstrous effect. At Netherworld, "scare actors" receive special training to identify the five main types of haunted house visitors and reduce each of them to a pile of quivering Jell-O.

Which Haunted House Victim Are You?

Often the ringleader organizing the visit, the Brave One is a repeat customer that's too experienced to be spooked by the usual haunted house tricks. Or so he thinks.

"Their entire consciousness is aimed at maintaining their composure," says Armstrong. "To them, not being scared is a victory ... We want to catch that big dude in the front. He's worth more points."

At Pittsburgh, Pennsylvania's Hundred Acres Manor, manager Terry Peyton trains his actors to take down the tough scares. One method is the double attack.

"The actors can see these people coming, so they're ready to jump out with a startle scare," says Peyton. "Even if the customer doesn't respond to that first scare, they've let their guard down. 'That guy already jumped out,' they'll think. 'I'm good to go.' A few seconds later, you jump out again just as they're leaving the room. That tends to be fairly effective."

It's one thing to be scared in a haunted house, but it's downright cowardly to use your sweetheart as a human shield.

"The Offerer is the person who is pushing their screaming girlfriend or boyfriend forward in front of them," says Netherworld's Armstrong. "The screaming one is called the 'Offering.'"

Peyton, of Hundred Acres Manor, employs some simple misdirection to catch the Offerer off guard.

"In some rooms, there's more of a show, where one of the actors will launch into a dialogue with the guests," says Peyton. "Across the room, there's another actor behind a drop panel. While all of their attention is focused on the speech, we hit the drop panel and second person pops out and screams at them."

To visitors, the haunted house maze is hugely disorienting, but the actors know exactly where each group is and how fast they're moving. Animatronic ghouls are triggered by pressure pads in the floor. By listening for the "whoosh" of the robotics, the actors can time their attack.

"If it's a really fast-moving group, they're probably a little bit jumpier," says Peyton. Easy prey.

Everybody loves the Screamers, Armstrong says. "They really recharge your batteries when you get a great reaction."

"They're jumping and screaming at everything," says Peyton. "They're having a ball and they're so much fun for the actors to scare, because they're so responsive. Those are the people who make the night worthwhile, as opposed to the people who walk through with their hands in their pockets and just nod at you when you scare them."

Not that it requires extra effort to spook a Screamer, but one particularly devious tactic is to pay attention when someone in the group yells out a name — "Look out, Cindy!" — and have the actors keep repeating the name through the rest of the haunt: "Which one of you is Cindy?" "I'm coming for you, Cindy!"

For some visitors, haunted houses are much more than a once-a-year thrill; they're an all-consuming passion. These are the folks who attend haunt industry conventions and hang out on haunted house message boards.

"[The Experts] will walk through with a totally different eye," says Peyton. "They're more interested in the theme and the props than what the actors are doing. Sometimes they're not even paying attention."

One time-tested trick is to dress up an actor as a hyper-realistic statue or some other inanimate object. Even the most experienced haunt geek will get a jolt when that dead piece of stone comes to life.

Now That's Cool
Hundred Acres Manor in Pittsburgh operates as a nonprofit, donating a portion of its seasonal proceeds to charity. For the annual Lights Out for Leukemia & Lymphoma event, groups have to navigate a mile of pitch-black haunts with a single glow stick.

Cartoonist Jack Chick Dies, Having Offended Pretty Much Everyone 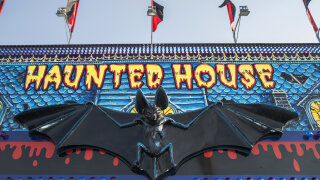 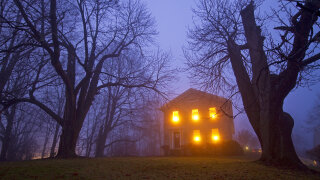