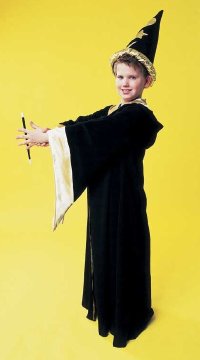 Kids of all ages can perform these tricks.

There's no time better for magic than Halloween. The magic tricks and games below take on a new life when played during a Halloween party. Many of these magic tricks are simple enough for kids to learn and enjoy.

Out of the Question

A sour future takes on a whole new meaning with this fortune-telling trick.

Shortly before kids are gathered, use a cotton swab dipped in lemon juice and, on different scraps of paper, write the words, "Believe it," "Never!," or "It is so." Allow each child to ask a yes or no question about his or her future, then have each choose one of the pieces of paper. Have an adult hold the paper close to a "magic" lightbulb (at least 60 watts). The warmth from the bulb will make the answer slowly appear.

Which Witch Is Which?

Smart kids might not believe in superstition, but they won't ever pass up a chance to test their brainpower. Give them a shot at this mind bender.

Arrange kids in a circle around a cauldron. (A large soup pot will do.) Hand the host child a witch hat to wear, and have him or her name one bewitching ingredient to put in the cauldron (eye of newt, tail of pig, slice of pizza -- whatever comes to mind), then the child passes the witch hat to the next person in the circle.

That person must don the witch hat, name the first kid's ingredient, then add his or her own ingredient before passing the hat. The next kid does the same, each kid having to remember all the ingredients named before. If someone can't remember the list, he or she is out. Last person in the game wins.

Hiring a magician is always a good move for kids' parties, but if you (or an older brother or sister) are willing to wear a cape, consider appearing before your guests' eyes as a mystical person of infinite powers.

Challenge kids to balance an egg on its narrow end. (Hint: Use hard-boiled eggs just in case!) They will find the task impossible. With a pinch of salt concealed in your hand, wave your hand over the egg, discreetly dropping some of the salt to the hard surface of the table.

Wave your fingers dramatically over the surface of the table in order to collect the salt into a small pile. With a flourish, balance the egg atop the granules. The salt -- invisible to the audience's eyes -- will support the egg.

Tie a knot at one end of a handkerchief, and stuff it in your pocket. To start the trick, yank the handkerchief from your pocket, concealing the knot in your closed hand and letting the unknotted length of the hankie hang below. Tell the kids you are going to knot the hankie using only one hand and a magic word of their choosing.

You can make a cup float. Pretend to take a drink from a foam cup, and then place your thumb in a hole in the back (which you made before the show). Move your fingers away from the cup so it looks like you're not holding it anymore.

Raise your hand with the cup attached (your audience must be in front of you). Use your other hand to pretend to try to grab the cup. The audience will see a cup floating, wiggling, and acting like it has a mind of its own!

Grab your left wrist with your right hand. Turn so your left shoulder is now to the audience. While you turn, move your right index finger up to hold the wand. With the back of your hand facing the audience, command the wand to stay -- and open your left hand. The wand stays put.

Your kids will be sure to giggle with our next game. In our next section, we'll show you how to play the Moonlight and Memories game.