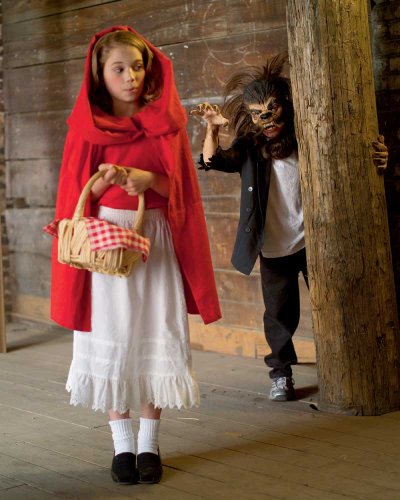 Kids' Halloween costumes can be the inspiration for your movie script.

Haul out the video camera and film a homemade horror movie. As you already know from watching them through the years, a plot is second fiddle to cool costumes, crazy makeup, and ear-deafening screams.

Use the kids' costumes to inspire the movie script, or you can provide garb by hauling out some old clothes, shoes, and costumes and letting the kids deck themselves out in whatever outfit suits their spooky style. Some old eye shadows and lipsticks are all that's needed to paint on blood, bruises, and some major under-eye circles -- they're all the rage with the walking dead. No doubt, the kids will have the screams covered. Let them spin out a basic script, and start taping.

For best effect, record the movie in small, one- or two-minute scene segments, and alternate between major close-ups, pans (sweeping the camera slowly across a scene), and zooms. The finished product will look less like a home video and more like a real horror flick. Add interest to each scene and build tension in the story by filming at different angles.

An ankle-eye view of a monster's sluggish footsteps; a look into the mouth of a screaming victim; a switch from the victim's eyes to the monster's outstretched hands and back again; a peek at the outside from the vantage point of a vampire sitting in a coffin -- team up with the kids to make the most of your imaginations.

After the filming is complete, hook the video camera up to the television and turn off the lights to enjoy an instant screening.

Have magical goals? In our next section, we'll show you how to play the Hockey Wizards game.