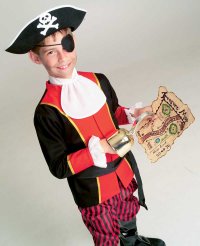 Pirates bring to mind Halloween excitement and adventure. Play the pirate-themed party games below for your own adventure.

Share the following story before handing each guest a secret map, which you can make using the recipe for tea-stained paper invitations. If you're creating identical maps for all the kids, photocopy the map before dipping the paper in the tea, and bury or hide a box filled with at least one treasure per child. If you're willing to draw a new map for each child, do it after the tea-dipped paper has dried, and bury or hide each child's treasure separately.

More than three centuries ago, Captain William Kidd, a famous Spanish privateer, was hired by the King of England to attack and pillage enemy ships. Captain Kidd attacked many a pirate ship, most from France, England's enemy at the time, and he earned a load of loot. But some say his heart was greedy, and word got back to England that he was pirating England's ships, too.

Angered by the pirate's betrayal, the King of England demanded Captain Kidd's head -- and with it, Kidd's ill-gotten stash. But the wily Captain was on the run. After he killed one of his own men, Kidd's crew mutinied. Soon he was alone and adrift in America. After burying his loot up and down the Atlantic coast, Kidd hid himself from the King and certain death in the shadows of Boston. He did a good job hiding his treasures. But Captain Kidd was found, arrested, shipped back to England. Though he protested his innocence, Kidd was hanged.

Nevertheless, Captain Kidd got the last laugh: The King found little of the pirate's loot, and three centuries later, treasure hunters around the world are still searching for it.

This is a great game to play after telling the story of Captain Kidd. It's played like hangman -- where kids take turns guessing the letters of a mystery word (the number of letters are marked by spaces on a chalkboard, dry erase board, or piece of paper).

The only difference? Instead of drawing a limb of the hanged man for each incorrect letter, a part of a disassembled cardboard skeleton (find a hinged one at a party store) is added until the skeleton is complete or a child solves the puzzle.

All of the kids can take turns being heroes. In our next section, we'll show you how to play the Rescue the Maiden game.