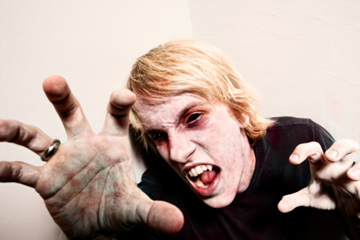 Teens can be dressed to impress -- or terrify -- with these costume ideas.
TLC

Picking the perfect Halloween costume is a big deal for many teenagers. No longer will a generic princess or baseball player fit the bill. Instead, the holiday attire needs to be a little eye-catching, humorous and maybe even attractive. But above all, a teen's Halloween costume has to be memorable. Image is everything (or almost everything) in middle and high school, and that even extends right down to getups worn one night out of the year.

These five ideas offer a sampling of the gore, humor and downright creativity that it takes to make a teen-perfect Halloween costume.

The great thing about Halloween costumes is that you can put a zombie twist on any of them. For teens, a zombie prom date may be especially apropos. To find a dress or tuxedo, they should check out local thrift stores; that way, they won't mind dousing it in fake blood and dirt for special undead effect. Girls can pick up a tiara as well and go as a zombie prom queen. Makeup and hair are crucial for looking like a convincing zombie. Use dark green, yellow and brown eye shadow around the eyes and cheekbones for a ghoulish appearance. Mussed up hair is also an essential finishing touch.

The concept of zombies as powerfully strong, slow-moving creatures driven to kill people was popularized with the "Night of the Living Dead" series of horror films. According to HowStuffWorks.com writer Tracy V. Wilson, director George A. Romero's zombie movies set the standard for modern zombies.

Dressing up like police officers is an irreverent, funny option for teen Halloween costumes. It's easy to find premade law enforcement costumes at most party stores. Teens can also head to local uniform supply stores or cobble together an outfit from their own slacks and button down shirts. Aviator-style sunglasses are the most important accessory when dressing up like a police officer. Guys might like to draw on a mustache as well. Toy guns and badges add a little more realism to the outfit, although teens should be careful about the venues they enter with their pretend firearms.

If teens want to think outside the box for Halloween, they should consider dressing up as a thing, rather than a person. One trendy way to do that is to make an iPhone costume. Teens could create a sandwich board out of two large pieces of black poster board that are connected at the top to sit comfortably on their shoulders. From there, they just have to decorate the front of their costume with whatever application icons they can design. If hauling around poster board sounds too cumbersome, a teen could simply adorn a black sweatshirt or long-sleeved shirt with smaller application icons. Steve Jobs would be proud.

Pirates might sound like kids' stuff, but they're a fun costume idea for both teen girls and boys. Eye patches and the tri-cornered hat are must-haves for this ensemble. Teens may encounter trouble on the high seas if they try to put the costume together out of their closets; in that case, a quick treasure hunt should reveal a variety of pirate costumes at party supply stores and other retail outlets.

To save some coin, teens can wear horizontally striped T-shirts (preferably red and white), black pants or a skirt and black boots. Tie a sash around the waist and tuck a plastic sword into it for truly swashbuckling effect.

Pirates still troll the high seas in search for precious booty. In 2007, pirate ships attacked 269 ships, according to the Maritime Bureau.

Unless you've been living under a rock for the past year, you know that teen vampires are all the rage right now. The Twilight and Sookie Stackhouse book series have brought vampires back from the dead and into pop culture. Teens might like to play off the current vampire trend, which shouldn't actually require much special costuming. There's no need for a Dracula cape and slicked back hair. To pose as a member of the stylish Cullen gang from "Twilight," for instance, teens just need a pair of false vampire teeth, white pants and shirt and some glittery lotion. A dab of fake blood on the chin is the perfect finish for the ominous ensemble.