by Alia Hoyt
You don't have to wear identical costumes to be a coordinating pair. Portra/Getty Images

Holidays are different once you become a parent. Your best Christmas present is always watching your kid open her gifts, and instead of attending an all-night kegger on the 4th of July, you're content with a family BBQ and a small fireworks show. But the transformation of Halloween is the best. No matter how much you enjoyed the holiday before, it's so much better when you have a little one to share it with.

The most enjoyable aspect of Halloween is seeing your kid dressed up, but many moms double the fun in matching mommy-and-me costumes! The possibilities are endless: You and your kid could be princesses, a villainous pair or pop superstars. And best of all, no matter who (or what) the two of you dress as, you'll both look great and collect twice the candy.

Next, let's discuss a few costume options that true girly-girls and their mamas are sure to enjoy trick-or-treating in. 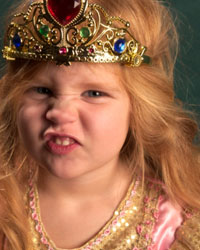 There might be little girls out there who would balk at the mention of dressing up like a Disney princess, but they're few and far between. You and your daughter can dress exactly alike, or you can watch a few classic cartoons for inspiration on coordinating costumes.

For example, your daughter could be Snow White while you rock the Evil Queen's trademark make-up and crown. If both of you wish to dress as Disney heroines, consider going as Princess Jasmine and Belle or as Rapunzel and Tiana. Naturally, any little girl would jump at the chance to sport Cinderella's ball gown in tandem with her fairy godmother. If you're feeling really charitable, you could dress up as one of Cinderella's singing mice, but that might be going above and beyond the call of duty. Even mothers have limits!

Every child has a television character that he adores more than all the others. Sure, you might not really enjoy watching said show or find the characters to be all that engrossing, but Halloween's really about the kids, right? Consider letting him pick out his favorite TV hero and then coordinate your costume with his. You can be the Patrick to his Spongebob, the Ruby to his Max or the Boots to her Dora.

Television made its debut at the 1939 World's Fair. One of the display models was made with a transparent case to prove to skeptical patrons that the devise was real and not a trick.

If you don't mind donning yarn for hair and have no problem literally painting your cheeks, this costume could be just what you've been looking for! Moms and daughters can sport matching Raggedy Ann outfits, complete with tights and Mary Janes. Or, consider dressing your son up as a sweet little Raggedy Andy, with rosy cheeks, a triangle nose and the requisite blue pants and bow-tie combo. If this costume option strikes your fancy, however, be sure to do it before your little man gets too old. Most moms would be hard-pressed to get any boy over the age of 3 to agree to this getup, regardless how much candy he'll receive.

The Origins of the Raggedy Siblings

Raggedy Ann was designed and patented by Illinois-based artist Johnny Gruellein 1915. Three years later, the character debuted in the first volume of "Raggedy Ann Stories," and in 1920, her equally-famous other half made his first appearance in "Raggedy Andy Stories." 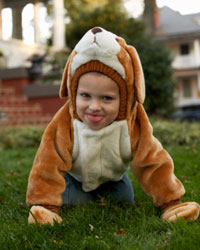 Your "pup" may feel the urge to walk on all fours while in costume, so make sure you stay close to ensure he remains upright.
Christopher Robbins/Riser/Getty Images

Animal costume ideas are as varied as the species they aim to emulate. Consider dressing up like mama and baby combos, such as a cat and kitten or a dog and puppy. You could also opt for a zoo animal theme, with you in a zebra costume and your kid as a lion, panda or other relevant option.

If you have multiple children, simply put on a pair of overalls and a straw hat to fill the role of farmer, and outfit your kids as barnyard animals, such as cows, chickens or pigs. Beware of letting your little ones wear feather-adorned costumes inside the house, though, unless you want to spend the next few weeks vacuuming up feather down and quills.

Capes and superpowers aren't just for boys! You and your mini-me can choose established female superheroes -- like Wonder Woman or the X-Men's Storm -- and go as a candy-eating, crime-fighting female duo. You can also feminize a traditionally male character like Spiderman by donning a pair of costumes in his standard red-and-blue design.

Of course, if you're hitting houses with your little man, you can mix and match heroes and go as Batman and Batgirl, or if you want to a too-cute-for-words team (and don't mind a little cross-gender dressing), let your kid be the star as Batman while you tag along as a much taller Robin.

If the two of you want to go out in the most recognizable super-outfits of them all, you can patrol the neighborhood as any Superman-Supergirl combo. You can even personalize your costumes by forgoing the giant "S" and opting for a more personalized touch, like the first letter of your last name.

Talk About Looking Good For Your Age!

Wonder Woman -- the world's most famous female superhero -- has been fighting crime since 1941, when she made her debut in All Star Comics #8. 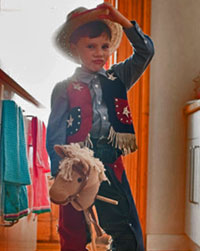 For some little boys, cowboys are never out of style.
Sean De Burca/Taxi/Getty Images

Sure, the reality of the violent Wild West, with all its shoot-outs and hot, dusty days, was anything but amusing, but that doesn't mean related Halloween costumes can't be lighthearted and fun! You and your little one could be outlaw Halloween bandits. Cover your faces with headbands and hold up houses with plastic six-shooters. If the idea of dressing up as criminals bothers you, stick with the more traditional cowgirl-cowboy combo. Think of it as the perfect opportunity to combine Wild West lingo with Halloween, as you "mosey on over" to the neighbor's house to "rustle up" some candy.

Donning the garb of a famous pair is the perfect chance to delve into history or have a little fun with current pop culture. You can take the opportunity to teach your kids about historical figures like George and Martha Washington, or fictional characters from literature or the silver screen, like a tot-sized Rhett Butler and a mommy-sized Scarlett O'Hara. Moms with two daughters might enjoy giving the Kardashian sisters a run for their ample money with flowing, glossy wigs and fashionable duds. Others might choose to celebrate more kid-friendly pairs, like Barbie and Ken, Smurfette and any given Smurf or Selena Gomez and Justin Bieber.

The best part is that while Halloween costumes are typically outrageously expensive, many of the duds used for these options can likely be found in your closet. For those pieces you don't already have in your wardrobe, you can pick and choose from endless affordable options at outlets and thrift stores. Honestly, your biggest expense might be springing for your babe's Bieber-style haircut!

No one wants to see these little pests inside the house unless they're of the costumed variety. Take a cue from your own backyard by outfitting yourself and your tyke in an insect-inspired costume set. Super-cute buggy options include ladybugs, butterflies in your favorite colors and a spider and a fly. You could even dress up as a bee and his favorite flower. However, you might want to stay away from dressing your child as a praying mantis or large, nasty beetle. It might seem funny now, but you don't want to look back at pictures of the two of you years later and think "eww" instead of "aww."

The largest insect to ever walk (or in this case swim) the Earth lived around 400 million years ago, during the Paleozoic Era. The pterygotid eurypterid -- or giant sea scorpion -- grew to over 8 feet in length, and like us today, it lived at the top of the food chain.

Consider this your opportunity to foster your child's love of reading by perusing your chosen book together and talking about the different characters you can each portray. Winnie the Pooh and Tigger are surefire crowd-pleasers, as are Goldilocks and one or more little bears. A big, bad mommy wolf escorting a little pig or two will be undoubtedly adorable. If you have a little boy and girl, you can even foray into the slightly more macabre area of children's literature by dressing up as Hansel, Gretel and the witch.

Children's Books That Made the Leap to TV

Many of the most popular kids' TV shows started out as children's books. Literary characters that later made the jump to TV screens include: Winnie the Pooh, Olivia, Thomas the Train and Max and Ruby. 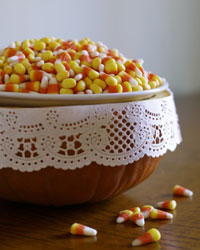 Candy corns may not be the best Halloween treat, but they make for sweet coordinating costumes.
James Baigrie/Riser/Getty Images

Every holiday has its purpose. Thanksgiving is about appreciating what you have; Valentine's Day is dedicated to celebrating the one you love, and the 4th of July gives us the chance to showcase our love of country. Halloween is devoted to the acquisition of candy while wearing silly clothing, and we're not making any apologies for it.

Take the opportunity to celebrate the true spirit of the holiday by choosing costumes related to your favorite sugary treats. M&M getups are always cute, or the two of you can pair up as Tootsie Rolls, lollipops, jelly beans or even sticks of gum. Truly enterprising mothers can construct many of these costumes from scratch with little effort, but no one will hold it against you if you opt for store-bought versions. Either will look both adorable and delicious! 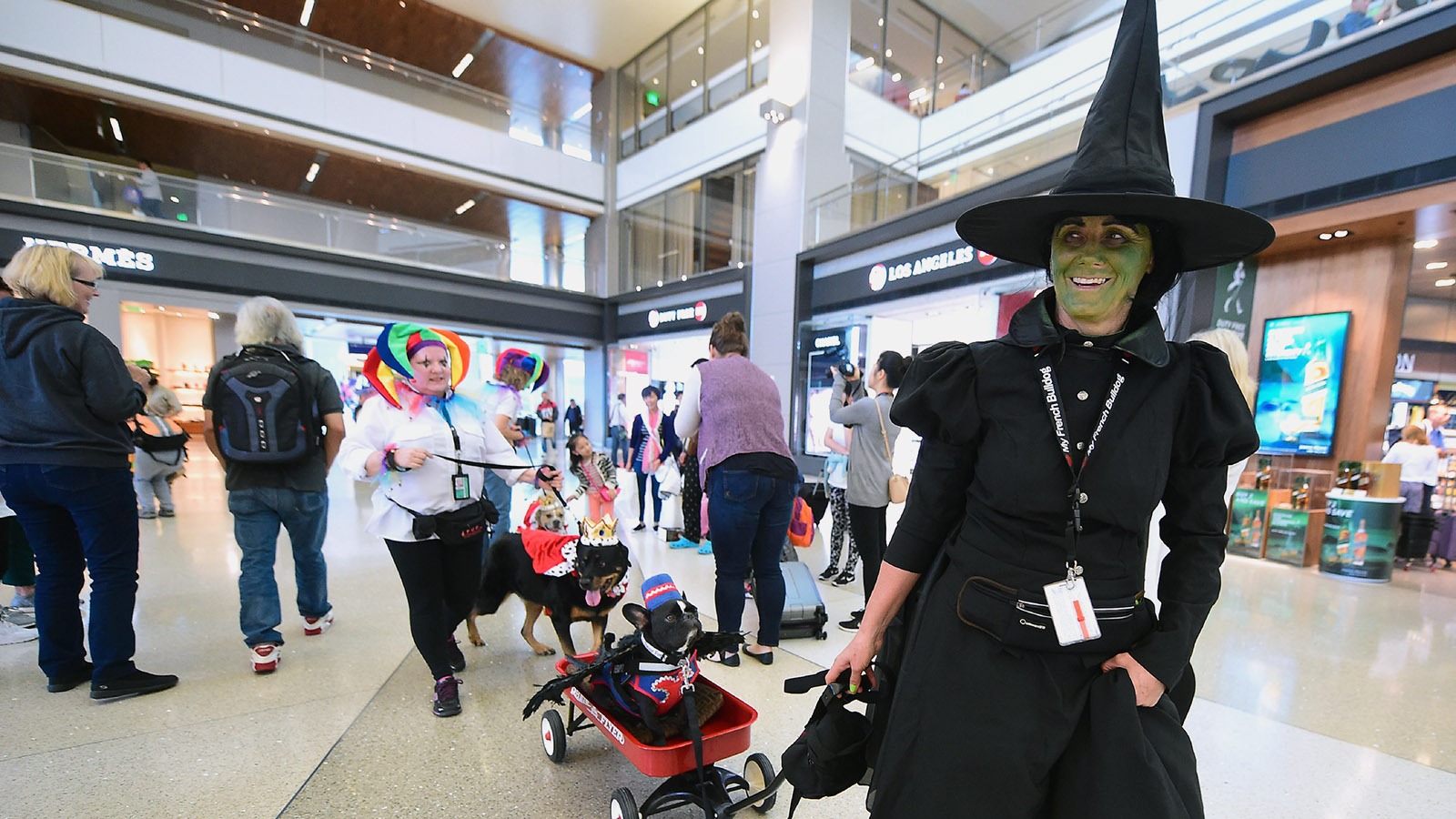