Should We Rise Up Against the Elf on the Shelf?

by Robert Lamb Dec 8, 2016
Would that elf freak you out as a little kid? CHRIS SADOWSKI/JFCREATIVE/GETTY

"Deep in each man is the knowledge that something knows of his existence. Something knows, and cannot be fled nor hid from."

Cormac McCarthy, America's elder-scribe of philosophic grimness, was of course talking about God when he wrote that in "The Crossing." But his pronouncement may well extend into our modern holiday traditions. I speak, of course, of the Elf on the Shelf.

Perhaps the elf has yet to infiltrate your house. After all, the dolls were only unleashed in 2005 with the publication of the children's book by Chanda A. Bell and Carol V. Aebersold. In the years to follow, they made their way into millions of homes, each with the authors' scripture to govern the practices surrounding their supernatural presence.

Yes, uninitiated, the Elf on the Shelf comes with rules! Each parent is encouraged to establish the following rules:

The elf watches. The elf waits. The elf reports all childhood behaviors back to his bearded, polar master so that he might exact his holiday judgement upon them.

Going even broader, "The Battle for Christmas" author Stephen Nissenbaum even likens traditional Christmases, with their Krampuses and coal threats, to "mini days of doom." And even modern children encounter a semi-apocalyptic vibe. Toys or no toys? Candy or no candy? For the materialistic child, the stakes could scarcely be any higher.

It's a formative time, after all, when children learn to navigate the waters of social responsibilities to human and inhuman agents alike. As such, it's no wonder parents still argue over the potential harm of invoking Santa's magic on young children. The Elf on the Shelf, however, has not lived among our holiday traditions quite as long. It is less shielded from our distrust and revulsion — and perhaps we feel this way for good reason.

In the 2015 article "Who's the Boss? 'The Elf on the Shelf' and the normalization of surveillance," authors Laura Pinto and Selena Nemorin questioned to what extent this wooden idol indoctrinates children into the mind-set of the panopticon.

To refresh, the panopticon (which means all-seeing) was a theoretical prison design championed by utilitarian philosopher Jeremy Bentham in 1787. The prison would, in theory, require minimal supervision while offering an effective, cost-efficient means of regulating a prison population. Cells would line the interior walls of this vast enclosure, and a central tower ensured that any given prisoner might suffer the guard's scrutiny at any moment.

The panopticon was never built as Bentham envisioned it, though numerous facilities would later cite the panopticon as an influence in their design. For the most part, the idea of the panopticon lives on only as a metaphor for surveillance. Twentieth-century French historian and philosopher Michel Foucault expounded on much of this notion, stating that modern disciplinary society breaks down to three key governmental techniques to control the masses: hierarchical observation, normalizing judgment and examination. Welcome to the panopticon.

The Elf on the Shelf, unblinking in its lifeless gaze but imbued with parentally induced holiday magic, would seem to offer all three of these panopticonic techniques. It serves in Santa's hierarchy, and it stands as a symbol of ubiquitous judgment and examination. These factors, Pinto and Nemorin argue, make the elf particularly problematic in our information age.

Sure, Santa was always watching you. He knows when you're sleeping. He knows when you're awake. We get it. But human agents always mitigated that situation, either in the form of holiday-stressed parents and perhaps one of Santa's helpers at the shopping mall. The Elf on the Shelf, however, is far from human. It can't be bargained with. It can't be reasoned with. It doesn't feel pity, or remorse, or fear. And it absolutely will not stop ... you know, until Christmas morning.

In this time of hacked emails and pilfered iCloud photos, of doxing attacks and professor watch lists, Pinto and Nemorin's words of caution ring all the more true:

While the elf may be part of a pre-Christmas game and might help manage children's behaviors in the weeks leading up to the holiday, it also sets children up for dangerous, uncritical acceptance of power structures.

Perhaps it's time to rise up against elfin oppression. Perhaps it's time to cast down their likenesses, question authority and remind our children that privacy still exists and the unblinking, judging eye of eternal surveillance is not free to roam our homes.

And perhaps we can stick to those values — as long as it takes us to lose patience with Junior's morning checklist. The polar panopticon waits patiently ...

Celebrity Copycats: What It Takes to Be a Star Impersonator

Goodbye to a Beloved Astronaut 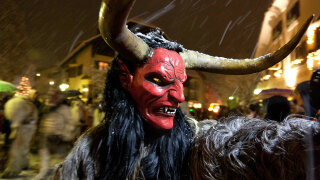 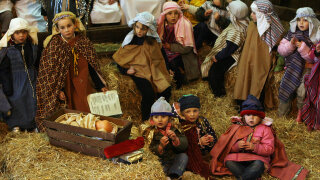