Can Santa really climb down the chimney? 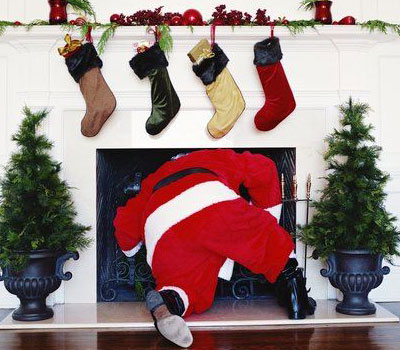 ­By the time the holiday season is in full swing, curious, knowledge-seeking children have lots of questions about Santa Claus and Christmas. How does Santa make it around the world in one night? Do reindeer really fly? Why do people keep giving us fruitcakes?

One of the most difficult questions that parents are faced with has nothing to do with reindeer flight or the physics of Santa Claus's flight path -- it's a practical matter concerning a chimney. After all, according to Christmas folklore, when Santa drops by your house to deliver his presents, he doesn't knock on your door or break any windows in the process. Instead, after landing on your roof, Santa climbs down the chimney, stuffs your stockings, places gifts under the tree and takes a quick milk-and-cookies break before climbing back up the chimney.

But how do­es Santa get down your chimney in the first place? Can he even fit into a chimney? Does he drop straight down, or does he use special climbing equipment? And what happens if you don't even have a chimney? Does that mean people without chimneys don't get any presents at all?

Although no one may ever know for sure just how Santa operates, we at HowStuffWorks have what we think is the most logical explanation for how the big guy might be able to navigate a small space: science, in the form of miniaturization technology. What does this mean? It's actually as simple as it sounds -- Santa could use this technology to actually shrink the size of his body.­

Michael C. LaBarbera, a professor of organismal biology and anatomy and geophysical sciences at the University of Chicago, believes that reducing the distance bet­ween molecular bonds could do the trick. There's a lot of empty space between the nucleus of an atom and the electrons surrounding it, so moving everything closer together could potentially decrease the size of an object. The mass of the object stays the same, of course, so that may explain any loud crashes that might come from the fireplace if Santa slipped [source: University of Chicago].

But what about Santa's suit? If he compresses his body to a small enough size to fit through the chimney, wouldn't the suit just crumple into a pile since it isn't a part of him? Santa's suit would need to be threaded with carbon nanotubes. This would allow the suit to compress as Santa himself compresses. His belt would also be equipped with a grappling hook, making his descent into your living room a bit smoother.

If there's no chimney, of course, he could just open your front door and walk right in -- sometimes you have to go low-tech. But a chimney entrance would be preferable since it's the most direct path from the roof to the Christmas tree. Plus, there's the show-off factor -- what else would you expect from a guy who can travel around the world in one night?

For more information on Santa's technology and Christmas-related articles, visit the next page.

Why do we decorate with holly at Christmas?
5 Halloween Myths That Will Not Die
Halloween Games